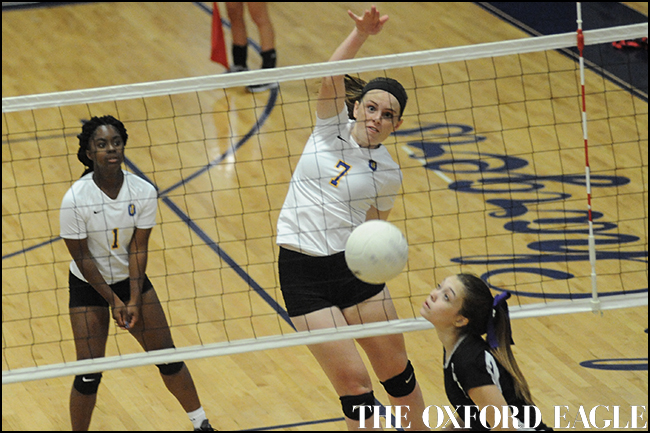 The conclusion of this week’s matches gave Oxford coach Tara Ross one theory about her team. They are really good at home and not as good on the road.

Oxford (7-3) looked primed to send Corinth, a team that eliminated the Chargers in the second round of last year’s playoffs, back home early by winning the first two sets for the 2-0 advantage.

The first set was not as much of a struggle for Oxford, but Corinth proved to be a pesky opponent in the second and third sets.

After Oxford edged the Warriors in the second frame, Corinth took command of the third set after using a 7-2 rally midway through to take the lead before using another 9-6 run to avoid the sweep.

The main issue for Oxford was the inability to keep a lead after surging out in front early in each set, causing the Chargers to have to either rally from behind or break a tie.

“We get mentally tired, and because we’re tired, we don’t talk and there’s no conversation,” Ross said. “We’re just kind of out there just running, and you can’t play that way. Balls were just dropping on the floor. We have to do a better job of being mentally tough through the whole process. … If we play like we did (Thursday) and being mentally tough, we have a chance.”

Oxford travels to Tennessee this weekend to play in the Freed-Hardeman Tournament before traveling to Lewisburg on Tuesday.

The Chargers will open up region play on Thursday when they host Greenwood.