Theatre Oxford kicks off season with ‘Crimes of the Heart’ 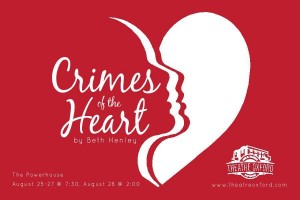 Theatre Oxford kicks off its new season this weekend with the Pulitzer Prize-winning drama, “Crimes of the Heart,” by Beth Henley.

The story focuses on the three Magrath sisters who live in Hazlehurst, Mississippi, in the ‘70s. They’ve gathered to await the news that their grandfather — who is in his last hours — is in the local hospital. The three were raised by “Old Granddaddy” after their mother hanged herself and the family cat, and have been eccentric ever since.

“Each of whom are dealing with life situations and disappointments as women of Hazelhurst,” Anderson said.

The play won the 1981 Pulitzer Prize for Drama.

Theatre Oxford will present “Crimes of the Heart” at 7:30 p.m. Thursday, Friday and Saturday and 2 p.m. on Sunday.

The sisters are played by Caren Watts as Babe Magrath, Shara Minton as Lenny McGrath and Jaime Adams as Chick Boyle. Others in the play include Clift Odom as Doc Porter, Bethany Tarpley as Meg Magath and Logan Little as Barnette Lloyd.

“We have gifted and experienced actors in this show,” Anderson said. “Several of the cast members have theater training at the collegiate level as well as some professional experience. All of the cast has theatre experience which brings a level of expertise to the show.”

The show is based in 1974, which presented a challenge for Anderson at times.

“The challenge in staging an older play set in the South is to make sure everything is as authentic as possible,” she said. “It’s difficult to find many of the types of props that would have been used 42 years ago.”

Anderson said directing “Crimes of the Heart,” and last year’s “Odd Couple” have allowed her to broaden her directing experience.

“It was a chance for me to work with adults and stretch myself professionally,” she said.

Josh Moore is producing the show. Abby Wilson is stage manager and Moses Vanderlip is in charge of the set’s construction.

“Anyone who appreciates theater and enjoys the type of storytelling only a Southerner can provide will like this play,” Anderson said.

Tickets for students, seniors and Theatre Oxford members are $15 and $20 for non-members and are available at the door and by calling 662-236-6429.