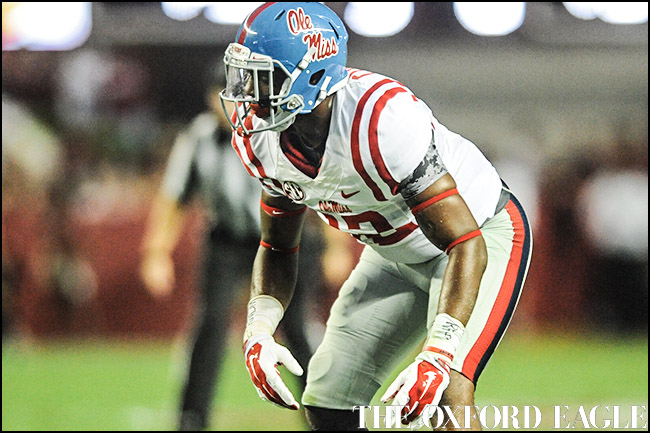 Tony Conner hasn't been limited much in fall camp as the senior safety works his way back from two knee surgeries last season. (Bruce Newman)

Tony Conner may have to wear a brace all season, but that’s fine with him.

Ole Miss’ senior defensive back is just happy to be running around again.

Conner said he feels about “90 percent” healthy as he continues to work his way back from a torn meniscus that cost him seven games a season ago. A mainstay at the Rebels’ Huskie, or nickel corner, position the last three seasons when healthy, Conner has been nearly a full participant in fall camp with his only limitations being a coaching decision by Hugh Freeze to hold him out the second practice of two-a-days as a precaution.

“Everything is going good,” Conner said. “Coaches and everything, they kept me back a little bit this camp, but as far as I know, every time the ones go out there, I was out there. I wasn’t trying to get held back any. Just trying to get out there and play with my brothers. “

As for the brace on his right knee giving him a little extra support, Conner said it hasn’t gotten in the way.

“The first day, it was kind of a little shaky, but after the first day, I felt more confident in it and continued to wear the brace and everything. I wouldn’t say that (it’s limited me) because if I did, I would just be using that as an excuse. I don’t think it’s limited me none at all.”

Having an active Conner on the field is a boost for a team that struggled to replace his production last season and has more youth in the secondary this fall. Conner suffered the injury against Alabama three games into the season and returned against Arkansas in November after a procedure to clean up the knee, but he wasn’t the same.

A second surgery late in the season sidelined him for good. A.J. Moore initially stepped in for Conner at the position, but that experiment lasted just two games before Mike Hilton moved back to Huskie to finish the season.

Hilton and Trae Elston are no longer around, triggering a youth movement at safety. Four freshmen and sophomores are in the two-deep at rover and free safety while a redshirt freshman, Montrell Custis, is competing to be Conner’s primary backup.

The fresh faces on the back end have made for some growing pains.

“The first couple of days (of camp), we were giving up big, explosive plays because we’ve got a lot of young guys,” Conner said. “Each and every day when we come to watch film, the coaches be on them telling them something right and something they did wrong like they’re out there doing their own thing or they’ve got their eyes on the quarterback. (Safeties) coach (Corey) Batoon does a good job telling them that it’s not high school anymore.”

Now pain-free, Conner, whose versatility makes him valuable in coverage and near the line of scrimmage, plans to be on the field more this season to offer his assistance after notching just 17 tackles a season ago.

“It feels great,” Conner said. “Coming from last year with the injury and just sitting at home watching my brothers play, it hurt. It’s just a great feeling just to be back out there with those guys right now.”