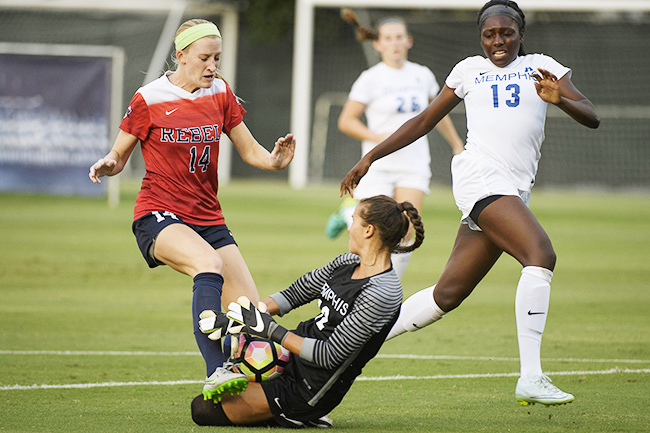 In a physical match on both sides, No. 19 Ole Miss soccer came up short to Memphis, 2-1, Friday night at the Ole Miss Soccer Stadium.

The Rebels (2-1) fell behind early after two Memphis (3-0) goals within the first 15 minutes, and couldn’t complete the comeback in front of a vibrant crowd of 835.

Despite the two early Tiger goals, Ole Miss dominated possession and the attack in the second half posting seven shots, four of which were on frame. The Rebels poured on the pressure up until the last second while Memphis was flagged with three yellow cards within the last five minutes.

Ole Miss’ lone score came off the foot of senior Addie Forbus, who has now scored in all three Rebel matches thus far. At the 71 minute mark, Memphis was flagged for a handball leading to a penalty kick, which Forbus nailed into the left corner of the net. The Amory, Mississippi native’s score puts her in sole possession of eighth place all-time in career goals.

The Tigers’ early goals came at the 11 minute mark from Serena Dolan, and at the 14:09 mark when Marie Levasseur got Ole Miss keeper Marnie Merritt in a one-on-one situation and scored off an open net.

Memphis was flagged with 21 fouls on the night, while the Rebels committed just 10. Forbus and CeCe Kizer both took three shots each for two on target, while Sara Coleman, Gretchen Harknett and Madison Meador also finished with two each.

The Rebels return to action Sunday night against Lipscomb at 6 p.m. in Oxford.