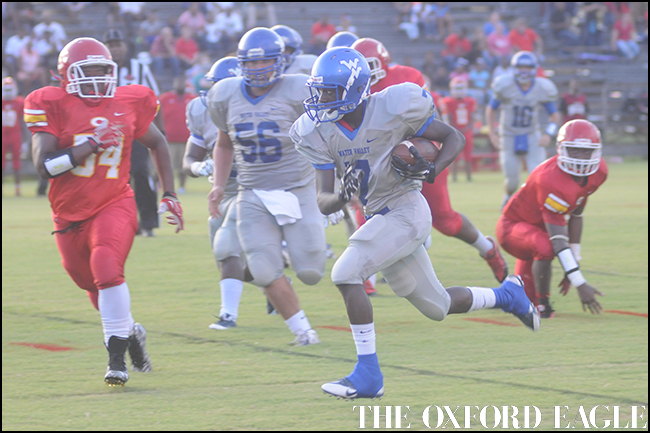 COFFEEVILLE — It did not take long for Water Valley to get the bad taste of last week’s loss to Eupora out of its mouth. In fact, it took less than one quarter.

“We’ll watch film and see exactly what went on, but obviously (Coffeeville) is a very young team and we jumped on them early,” Water Valley coach Brad Embry said. “It was good to get a win, but we also want to make sure we got those points doing things right. I think we got better from last week and maybe we had too big a game plan last week.”

The points came early and often for Water Valley (1-1), which scored on all eight first-half possessions and racked up 41 of those points in the first 12 minutes of the game.

On the opening drive, it took only four plays for junior quarterback Ty Varner and the Blue Devil offense to find the end zone. Taghee James, who started the game after being injured in last week’s game, knocked the zero off the board with a 4-yard touchdown run less than 90 seconds into the game for the quick 6-0 lead. Kicker Joseph Washington missed the extra point, but it was the only miss of his eight attempts.

After throwing for only 58 yards and completing 33 percent of his passes a week ago, Varner was much sharper on Friday. He was 7-for-7 on the night, which was a short one as all the starters sat the second half, throwing for 213 yards and three touchdowns. Varner also ran for six yards on two carries and had a 1-yard touchdown run.

“It was a little confidence,” Embry said of Varner’s performance. “Still early on, he was squeezing the ball a little too much, but after a couple completions, you saw the ball jump out of his hands better. I think taking some of the game plan out helped him as well.”

It was a balanced attack on the ground by the Blue Devils with James, Trenderrious Brock and Martavious Rockette each getting carries in the first half. James led the trio with 49 yards and two touchdowns while Brock had two scores of his own on four carries for 34 yards. Rockette had one carry for 23 yards.

For the third time in as many seasons, Water Valley pitched a shutout on defense. The last two came against Holly Springs by scores of 38-0 last season and 56-0 in 2014.

The Blue Devil defense was dominant all night, keeping Coffeeville from crossing midfield the entire game. On their first possession of the game, the Pirates (0-2) fumbled the ball with defensive lineman Payden Surrette coming up with the loose ball. It did not get any better from there.

Coffeeville’s possessions ended in four punts — one being blocked — a fumble, interception and a fumble on a kickoff return.

“I’m proud of coach (Jeff) Roberts,” Embry said. “He did a great job getting a game plan ready. I think this is the second week of seeing the same type of offense. Same formation, same basic scheme, so that helped us. Proud of those guys, and it’s all about confidence.”

Water Valley will have its home opener next Friday as the Blue Devils host Calhoun City.