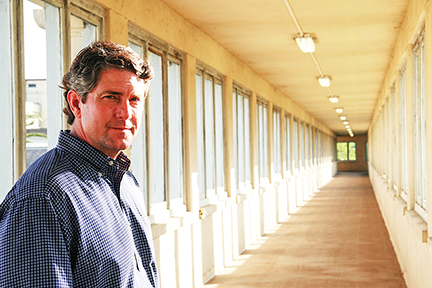 Oxford's Neil White was surprised this week when his memoir made the bestseller list for the first time. It was published seven years ago.

Oxford writer Neil White’s 2009 book “In The Sanctuary of Outcasts” made a surprise visit to the coveted New York Times bestseller list this week – seven years after original publication.

Making the New York Times bestseller list is rare for an author. Making it seven years after publication for the first time is practically unheard of.

White’s book had plenty of success after its original release, winning White the 2010 Southern Library Association author of the year award, but it never quite made the bestseller list.

That all changed this week with little notice when the Times’ combined print and e-book nonfiction bestsellers list had “In the Sanctuary of Outcasts” at No. 15. Others on the list include Malcolm Gladwell’s “Outliers” at No. 12 and Ron Chernow’s “Alexander Hamilton” at No. 6.

“To say I’m surprised is an understatement,” White said shortly after learning the news. “I’d given up any hope of making the list in the Summer of 2009.”

White was traveling in Michigan with family when a member of his church called him, excited that she had just seen his book on this week’s list.

The assumption is that “In the Sanctuary of Outcasts” sales are being driven by colleges and universities assigning it for classroom reading. With the fall semester just getting underway, it was enough to propel the book to bestseller status.

“It’s a nice feeling to make the New York Times list, sure, but I’ve always tried to remember that this isn’t my book. I’m the least interesting character in the story.,” White said. “I was lucky enough — at least from a writer’s perspective — to spend a year living among them.”

This visit to the bestseller list may not be the last for White’s prison memoir since a movie is in the works. Word came last summer that a film is being developed by veteran producer Stratton Leopold with Dax Phelan writing the adaptation.

The book is the “emotional, incredible true story of White, who discovers the secret to happiness, leading a fulfilling life, and the importance of fatherhood in the most unlikely of places—the last leper colony in the continental United States.”