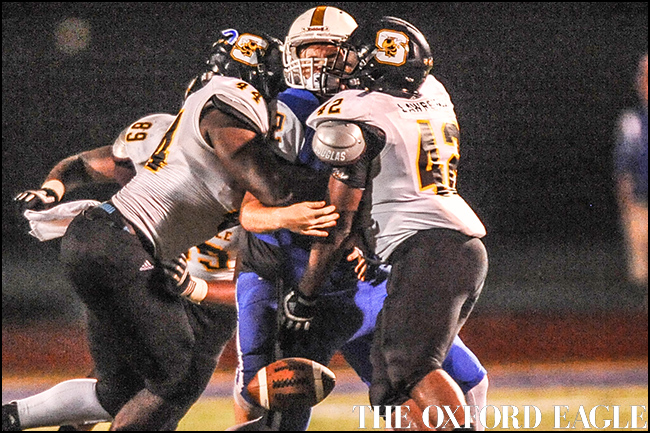 A packed stadium on a Friday night means that high school football is now into full swing.

Unfortunately for Oxford, Starkville took an early lead thanks to a 20-yard pass from Malik Brown to Cam Gardner nine minutes into the game, and it would stay that way for the rest of the game. The Chargers fell 28-16 in the latest rendition of the Little Egg Bowl at Bobby Holcomb Field on Friday, their third straight loss in the series.

Oxford first-year coach Chris Cutcliffe’s aggressive playcalling made for a potential comeback late in the game, but Starkville’s linemen on both sides of the ball proved to be too much.

“Their guys up front did a tremendous job, but we need to run the ball better,” Cutcliffe said. “Our guys fought hard the entire game and showed some resilience late in the game.”

Fans from all over came to see the Chargers (1-1) take on the Yellowjackets (2-0) with even Ole Miss head coach Hugh Freeze being spotted in the massive crowd. Starkville star linebacker Willie Gay is an Ole Miss commit, and a lot of people were not disappointed by his performance, especially on a goal-line stand late.

Gay came up with three consecutive tackles to force Oxford into a turnover on downs on Starkville’s 1-yard line. Gay showed off his athleticism by batting down pass after pass, making key open field tackles and captaining the Yellowjackets’ defense to hold the Chargers’ rushing attack to negative net yardage.

“We had some miscues on offense that we need to be able to overcome, and not being able to score on the 1-yard line is one of them,” Cutcliffe said of Starkville’s goal-line stand that ultimately led to a safety but not an Oxford touchdown. “We took advantage of opportunities defensively, but we need to communicate better and that is something we are going to work on next week.”

The Chargers’ offense was stagnant in the first half, but after Starkville’s late third-quarter score made it a two-touchdown game at 21-7, Oxford came out firing. With nine minutes left in the game, quarterback John Reece McClure hit Barry Flowers on a 44-yard touchdown pass to bring the game within one score. A surprise onside kick that was chipped over the Yellowjackets’ front line was bobbled and eventually recovered by the Chargers deep in Starkville territory, where the goal-line stand kept the Chargers from scoring, but Quentin Wilfawn’s sack for a safety gave Oxford the ball back with a little less than six minutes left.

The Chargers were unsuccessful in the drive and, after the first pass was batted down by Gay, McClure fumbled on third down to bring up a desperate fourth-down situation. Cutcliffe attempted a fake punt, but it proved to be unsuccessful and Starkville was given the ball in Charger territory. Hard running by Starkville sophomore running backs Rodrigues Clark and KJ Lawrence ended in a Clark touchdown and put the game out of reach.

It was a hard-fought game between both teams, and Oxford running back Hiram Wadlington said he is optimistic about next week.

“I know I can speak for everyone and say that this game is behind us,” Wadlington said. “The defense gave us a lot of opportunities, and we just need to finish. We need to come together as a team earlier in the game, and if we can do that, we’ll be good.”

The Chargers look to bounce back against another Class 6A opponent in Madison Central on the road next Friday.