A healthy Eric Sweeney gets chance in Ole Miss’ backfield 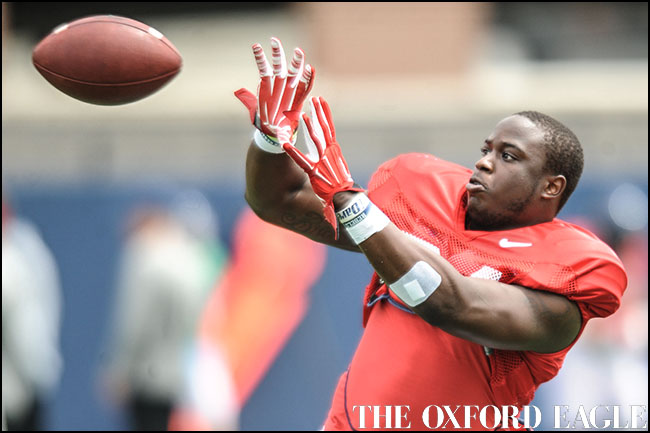 A year removed from a leg injury that forced him to redshirt, running back Eric Swinney is set to be a significant part of the rotation in Ole Miss’ backfield this fall. (Bruce Newman)

Eric Swinney figured he’d have some college stats to his name by now.

The way Ole Miss coach Hugh Freeze gushed about the young running back when Swinney signed with the Rebels two Februarys ago, it seemed likely.

Yet Swinney’s college career was put on hold when a stress fracture he credited to the wear and tear of his prep career popped up in his leg last summer, forcing him to redshirt and watch Ole Miss’ run to the Sugar Bowl from afar.

“It was a downer last year, but I just let God handle it and everything. Just prayed about it. Just kept my wits about myself and just tried to focus on school and everything. I just went through it.”

Swinney believes he’s come out better on the other side. Now healthy, the former consensus four-star recruit is ready to make the impact he and his coaches thought would come much sooner.

“The rehab was crazy, but I really needed it I think because I’m starting to become a player that I thought I could never be,” Swinney said. “The rehab helped me to get bigger, stronger and faster, so I’m not complaining.”

Though the recent news of Jordan Wilkins’ academic ineligibility forces Swinney’s role to increase starting with next week’s Labor Day opener against No. 4 Florida State, the 11th-ranked Rebels were counting on it anyway.

Little bit of everything
The redshirt freshman began fall camp nipping at the heels of Wilkins and fellow veteran Akeem Judd in the backfield pecking order. Judd will likely start the season as the primary back, but Swinney may have the most diverse skill set of any back on the roster.

“I can hit you with power, speed, anything,” Swinney said. “I can have quickness, too, and vision. I think vision is strong for me, too.”

Swinney finally got to showcase his talent this spring when he took part in his first collegiate practices. He turned heads with his ability to run through or around defenders and is more advanced than most young backs in pass protection, something he said he got plenty of practice with playing in a pro-style offense at Sandy Creek High School in Tyrone, Georgia.

“Swinney picks (pass protection) up fast, and he’s real physical,” offensive coordinator Dan Werner said. “He’s going to be a good one back there.”

He’s able to do it all at 210 pounds as part of what will be a beefier look for Ole Miss’ backfield this fall. Judd, the heaviest of the bunch, is listed at 228 pounds while Eugene Brazley (192) is the only back that weighs less than 200 pounds. True freshman D’Vaughn Pennamon comes in at 5-foot-11 and 218 pounds.

“(Swinney) is going to be a great player,” Judd said. “He’s a hard-nosed runner and runs straight downhill right into you. The type of stuff that a lot of coaches look for in a running back, he has it.”

Swinney said the leg doesn’t give him any more trouble, and the injury isn’t something he thinks about anymore. If anything, it may have been a blessing in disguise now that Swinney knows he’ll be a significant part of the offense this season.

“I don’t think so,” Swinney said when asked if his running style has changed a year removed from the injury. “Just got stronger and faster and feel better.

“Just help the team out. Everything else will fall into place.”