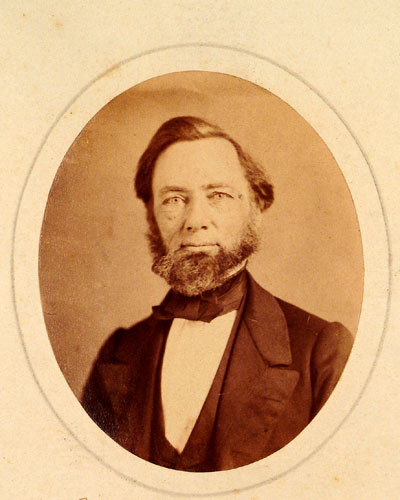 While doing some reading on Oxford and the University of Mississippi on the eve of the Civil War, I found an interesting story that I would like to pass along to you in this week’s column.

The event, known as the “Branham Affair” questioned Chancellor F.A.P. Barnard’s loyalty to Mississippi and the South and the brother-in-law of Congressman L.Q.C. Lamar, who was also the son-in-law of former Chancellor Augustus B. Longstreet. Branham’s home just off the Square on East Jackson Avenue (known as Depot Street or Quality Row in those days) was one of the five homes burned when the Yankees burned Oxford.

In 1845, Judge Longstreet’s eldest daughter, Francis Eliza, had married Dr. Henry R. Branham, a member of a family affectionately known by the Longstreet’s for a great many years. His family was prominently identified for a long time in middle Georgia and the Methodist Church. When the Judge was made the second Chancellor of the University of Mississippi in 1849, the Branhams would follow him and his wife to Oxford in early 1850.

The Longstreets were a very close family, and their two surviving daughters wanted to be near their mother and father. It was said that Longstreet could discuss politics with Lamar and business with Branham. It was also reported that all three families were inseparable and at times they all lived together in the same home.

Dr. Branham had harbored ill feelings towards Barnard since he was appointed Chancellor after the resignation of Longstreet. In some ways, he thought that Barnard had forced the Judge out of his position in 1856. Shortly after his father-in-law had resigned, at an informal meeting of Oxford businessmen, Branham stated that if “he should see the university in flames he would not lift his hand to help put out the fire.”

Because of an event that transpired on May 11, 1859, Branham had found a way to reap vengeance against Barnard. Chancellor and Mrs. Barnard were away on a visit to Vicksburg. That night two students entered Barnard’s residence on the campus, and with “shameful designs” upon one of the “defenseless female servants” assaulted and beat the slave, Jane, so that for two months thereafter she showed visible bruises and for several days unable to work.

Professor Edward C. Boynton, who lived in the adjoining residence, had over heard the altercation and had even seen the two students as they left Barnard’s residence. A few days later he learned the names of the two students through the usual student discussion of the incident. The two students were then called before a faculty meeting on May 23, 1859. One pleaded not guilty but failed to prove his alibi. The other refused to answer any questions put forth by the faculty.

After the presentation of the testimony, it was moved that the students should be suspended from the university. This motion failed but it was resolved by the faculty committee, “That, although the faculty were morally convinced of the student’s guilt, yet they do not consider the evidence adduced to substantiate the charge as sufficiently legally to convict him.” Remember at this time, slaves could not testify against whites in the South.

In spite of the faculty decision, Barnard did ask the students to withdraw from the university. One student that had assaulted Jane would latter apply for readmission, but Barnard succeeds in preventing his re-enrollment. There was some student rebellion and several men in protest transferred to Cumberland University in Lebanon, Tennessee.

As the event became public knowledge, critics of Barnard seized upon the opportunity to have the Chancellor replaced. Banham started a whispering campaign and he would tell anyone that would listen that Barnard was “in favor of taking negro testimony against students.” When this came to Barnard’s attention, he indignantly denied it.

In Dr. Allen Cabaniss’ history of the university’s first hundred years of the University of Mississippi, he states that “through the negligence of the secretary and the seemingly ordinary and unimportant character of the proceedings (the faculty meeting of May 23, 1859), the minutes of this meeting were not reported: that page in the faculty book is blank except for the date.”

Due to this fact, Barnard called another faculty meeting for February 2, 1860. This was so that a true record of the faculty’s findings could be made a part of the university’s records. The faculty members were then allowed to enter into the minutes each of their own reasons for their vote. Barnard then asked for a full meeting of the Board of Trustees to investigate the charges made against him.

The Trustees met in Oxford on March 1st and 2nd of 1860 to hear the charges brought against Barnard by Branham. Each man had secured his own witnesses. Branham stated that his objection to the matter and to Barnard were three-fold. First, that Barnard admitted black testimony as circumstantial evidence against a student; second, that he wanted the university catalog printed “at the North,” and third, that he had considered the offer of a position at Yale.

When Chancellor Barnard had been questioned and after he recounted the incident and justified his action, he concluded by saying, “as to my sentiments on the subject of slavery … I am a slave holder, and, if I know myself, I am sound on the slavery question.”

The Trustees, by unanimous vote vindicated Barnard and they stated, “F.A.P. Barnard stands fully and honorably acquitted of every charge brought against him.” They went on to resolve “and declare our full conviction that his labors are doing great service to the cause of education and science, and placing the reputation of the University upon an immovable basis.”

News of the incident and the campaign against Barnard even reached to our nation’s capitol and to the ears of former Trustee and close friend of Barnard, Secretary of the Interior Jacob Thompson of Oxford. He saw fit to write and urged him not to be “moved by these things … Such trials will only prove your firmness and worth, and the mischief will fall on the heads of your adversaries.”