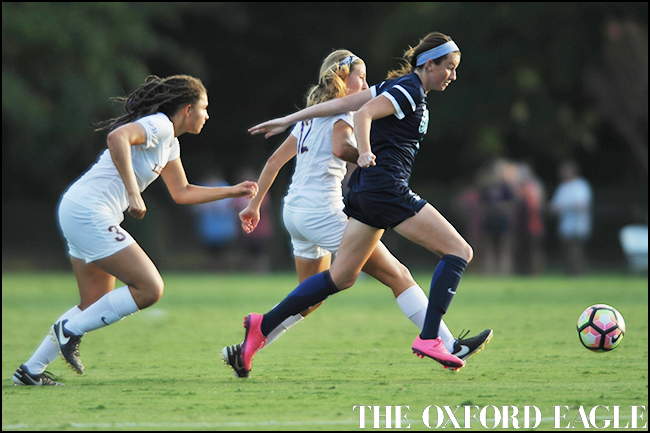 No. 19 Ole Miss soccer cruised to a 3-1 victory over Lipscomb Sunday night at the Ole Miss Soccer Complex thanks to offensive efforts from senior Addie Forbus and sophomore CeCe Kizer.

Forbus, who entered the match with five goals already, added to her season total with two, having now scored in all four matches thus far. Defending SEC Freshman of the Year CeCe Kizer netted her first goal of the year and also pitched in with two assists totaling four points on the night.

The two sides played 25 minutes of scoreless soccer to begin the contest, before the Rebels went on to post 22 shots on the evening, 15 of which were on target.

Kizer kicked the offense in high gear at the 25:25 mark when she dribbled from the right side and punched one in with her left foot putting the Rebels on top, 1-0.

But, the Lady Bisons responded just a minute later when Alesondra Colbert found the net knotting things up at 1-1. That score would last five minutes before Forbus took a pass from Kizer on the near side and punched in her sixth of 2016 into the right back corner.

The Amory, Mississippi native went on to net her second of the match in the 80th minute when she poked one in from nearly 30 yards out with her right foot thanks to another Kizer assist.
Only four matches in, Forbus is now just four goals off tying her season total from 2015 and leads the SEC in scoring.

The Rebel backline posted yet another impressive performance as sophomore goalkeeper Marnie Merritt had to make just two saves on the night, while the defense held Lipscomb to just six shots.

Ole Miss hits the road for the first time this season next weekend when it travels to Ann Arbor, Mich. To face the Wolverines in non-conference play Friday night. The Rebels return home this Sunday for a non-conference matchup with Troy.