Slain nuns had ties to Oxford 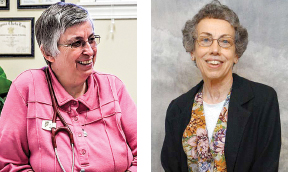 Sisters Paula Merrill and Margaret Held served in Oxford from 1993 to 1996 and were once members of St. John the Evangelistic Catholic Church. Both nuns were murdered Thursday in Durant.

Two nuns found slain this week in Holmes County were once affiliated with St. John the Evangelist Catholic Church, according to Father Joe Tonos and parishioners who knew them.

Sisters Margaret Held and Paula Merrill were nurse practitioners who dedicated their lives to providing health care to people in Mississippi, including Oxford where they worked in the county health department in the early ‘90s.

According to Steve Stricker, the sisters were assigned to Oxford, along with Sister Mary and Father Kevin.

“They had been back to visit several times – really nice,” Stricker said. “So tragic and so sad. They are martyrs.”

The women, both 68, were found dead at their home Thursday morning after they failed to show up for work at the Lexington Medical Clinic, where they gave flu shots, dispensed insulin and provided other medical care for children and adults who couldn’t afford it.

Their stolen car was found abandoned a mile from their home, and late Friday Rodney Earl Sanders, 46, of Kosciusko, was charged in the deaths. Authorities said Sanders was being held in an undisclosed detention center pending a court appearance.

Authorities have not said how the women were killed, but the Rev. Greg Plata of St. Thomas Catholic Church in Lexington, where the nuns had led Bible study for years, said police told him they were stabbed.

The state posted a reward of $20,000 for information leading to an arrest and conviction.

Merrill’s sister Rosemarie, speaking by telephone from her Stoneham, Mass., home, said her sister had been in Mississippi helping the poor since 1981 and had previously worked in Holly Springs, where she used to ride around on a moped and was instrumental in locating the source of a tuberculosis outbreak.

Merrill was raised in the suburbs of Boston and came from a working-class family, her father a laborer and her mother a bookkeeper, her nephew David said. He said his aunt had worked with Held for many years.

“We always considered Margaret just part of the family,” he said. “The word ‘sister’ has many meanings, and they fulfilled all of them.”

Rosemarie Merrill said she doesn’t know what will happen to the clinic now and worries about the effect on health care in Holmes County. She said her sister and Held would often go into the clinic on Sundays after Mass or on their days off.

“It’s just going to be a disaster,” she said.

According to Joan Cleary, a long time member of St. John, sisters Paula and Margaret moved to Oxford from Holly Springs in 1993 and were members of St. John Catholic Church until they moved to Marks in 1996.

Cleary remembers Merrill commuting one day a week to Alabama to continue her studies for her certification as a nurse practitioner.

“I met them and knew them through the church,” Cleary said. “We shared meals, laughter and love of our church. My happiest memory is of their angelic voices during mass.”

Their tragic death has hit her hard.

“My heart weeps for them at the suffering they endured during their final hours on earth,” Cleary said. “I am reminded of Mother Teresa’s words, ‘We can do no great things – only small things with great love.’ Sister Paula and Margaret have left much love to the many people they touched in Mississippi.”

Genette Pierce, who works at a home health and hospice business a few doors down from the clinic, said: “Their patients — all of them — they’re going to be lost without them right now.”

The Catholic Diocese of Jackson says a wake will be held today at St. Thomas Church in Lexington. A memorial Mass is scheduled Monday at the Cathedral of Saint Peter the Apostle in Jackson.

The diocesan chancellor, Mary Woodward, says the memorial service will be “an opportunity for the diocesan community and friends to celebrate the lives of these two remarkable women.”