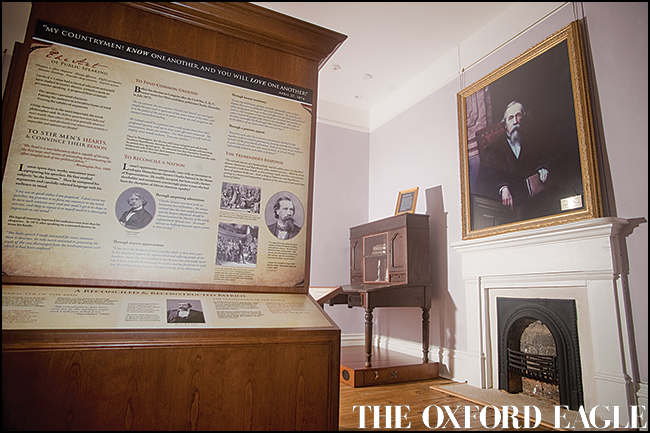 An exhibit on the life of L.Q.C. Lamar at the L.Q.C. Lamar House in Oxford, Miss. on Wednesday, March 9, 2011. The exhibit was built by Malone Design/Fabrication.

Money magazine recently named the L.Q.C. Lamar House and Museum the top free thing to do,” in Mississippi.

The list chose only one attraction from each state and included places of interest that were “off the beaten track,” and all are free.

The house is owned by the city and managed by the Oxford Historical Properties Commission. However, it was Oxford-Lafayette Heritage Foundation, started in 1996, that transformed the dilapidated former state congressman’s home into the museum it is now.

Darlene Copp, one of the founders of the OLHF, said the foundation was excited to hear about Money’s hat-tip to the home.

“Very surprised that with all the historic house museums in a state drenched in its past, whether antebellum or Victorian, that the relatively modest house built by Lucius Lamar and his wife Virginia and the challenging exhibit within it would attract such an honor and by such a well-read, respected publication,” Copp said.

“That Money magazine recognized a 19th-century home of a little-known historical figure and statesman means that residents and visitors may pay more attention to Oxford’s historic assets, which I have personally been involved with,” Copp said. “Because for a town its size, there’s a great deal of important and interesting history to learn about.”

The Lamar House initially charged admission when it first opened after the renovations in 2008. However, Copp said it became a hassle for volunteers to make change for visitors.

“Going the no-admission route was freeing, and now we definitely know it was the right thing to do,” Copp said.

Copp said the late Bill Russell championed saving the house, which was near collapsing, and watched over its restoration. Getting a museum designation was made possible through a Preserve America grant. Inside the home are 64 panels that tell of Lamar’s life.

A skillful orator, Lamar is credited with taking a first step in reuniting the nation, with his 1874 eulogy of Massachusetts Sen. Charles Sumner.

Lamar’s career in Washington included service in the U.S. House of Representatives and Senate, and he was appointed Secretary of the Interior by President Grover Cleveland. He later became the only Mississippian ever to serve on the U.S. Supreme Court.

“Lucius and Virginia’s (Lamar) beautifully restored house is deserving of recognition in the 21st century and we look forward to many more visitors to come by and find out why,” Copp said.

For more information about the L.Q.C. Lamar House and Museum, visit http://www.lqclamarhouse.com.