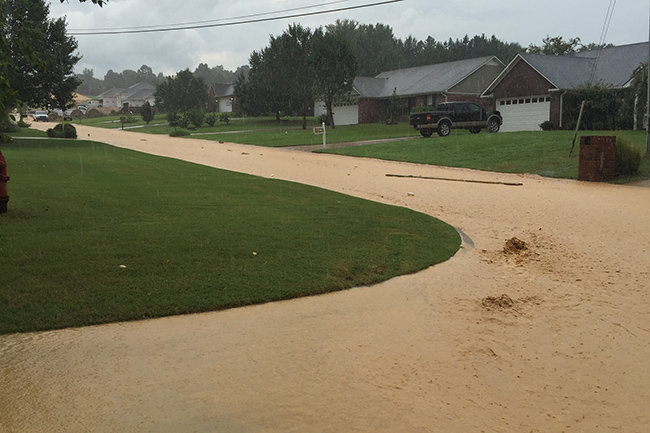 Residents of Shelbi’s Place subdivision were not very happy during Friday afternoon’s deluge that caused serious street flooding, as well as floating debris from the latest construction project that has come under criticism.

At least three homes took on water as the drainage system struggled to keep up with the heavy rainfall along North Shelbi Drive. Erosion and debris from Phase VI, which began clearing land and constructing homes in recent weeks, caused streets to pile up with mud and two-by-fours and further complicated the drainage problem.

Janessa Hicks, a resident of Shelbi’s Place, said this has been an ongoing issue.

“We have spoken with some county officials who said ‘this wasn’t supposed to happen,’” Hicks said Friday. “We’ve had issues out of the construction since it started and can’t seem to gain any traction to get things fixed.”

The newest construction site is located at the top of North Shelbi Drive. Debris and mud flowed down the street Friday during the downpour.

Residents have appeared before the county planning commission and supervisors in recent weeks to voice their concern that the drainage of the new phase is not adequate.

Over the weekend, county inspector Joel Hollowell informed developer Lee Marquis to shut down the construction site until water retention ponds have been built and adequate silt screens have been put in place.

It was just over three weeks ago that the Lafayette County Board of Supervisors took the unprecedented step of posting weight limit signs within the subdivision to prevent concrete trucks and heavy equipment from residential streets.

The subdivision, located on Highway 7, has an entrance on County Road 370 for construction vehicles, but residents claim that entrance is not being utilized by the homebuilders and workers are parking their trucks three deep on the road.

During their board meeting earlier this month, District 5 supervisor Mike Roberts said “enough is enough” and made the motion for the weight limit at the recommendation of Hollowell.

“I’m tired of my phone ringing day and night,” Roberts said at the time. “All these people can’t be wrong. If it takes shutting the project down, I don’t want to go there, but we’ve bent over backwards and we’re hearing the same problems over and over again.”

Attempts to reach Roberts for comment Monday morning were not successful.

Here is a reader submitted video of the street flooding that happened in Shelbi’s Place on Friday.