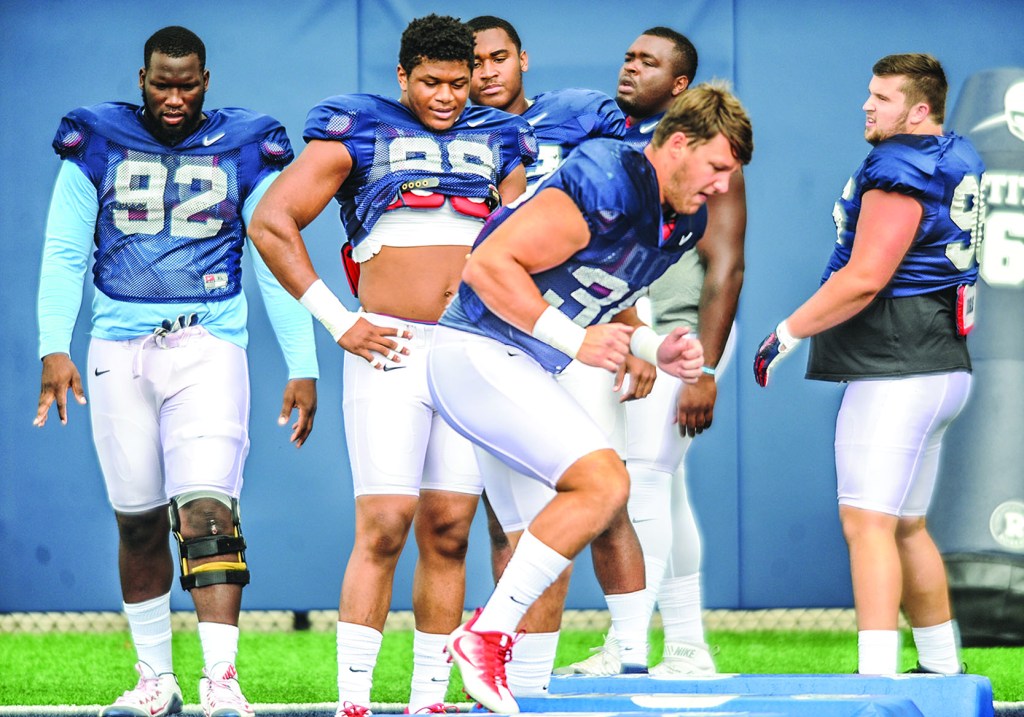 Fadol Brown has not fully recovered as quickly as he, or the coaching staff, would have liked to.

Ole Miss coach Hugh Freeze has stated the senior defensive end is trying to deal with a pain management issue in regards to two surgeries to repair a fracture in his foot. Brown went to Texas last week for another treatment procedure in hopes of being able to handle that pain enough to start in Monday’s season opener against No. 4 Florida State in Orlando (7 p.m., ESPN).

The players had an off day on Monday and return to practice today, which is when Freeze will find out how Brown has responded to the latest treatment attempts.

“Sometimes it is easy that it feels better when you are walking around,” Freeze said during Monday’s press conference. “We will see how it goes (today) in practice. (Brown) was very optimistic.”

In planning for a future without Brown being able to participate against the Seminoles, senior John Youngblood has been moved up to the No. 1 defensive end on the right side with Brown listed at No. 2 on the latest depth chart released on Monday. It is just another chapter in Youngblood’s story that sped up in the spring with the honor of wearing No. 38 and being the recipient of the Chucky Mullins Courage award.

“There was a little conversation in the summer,” Youngblood said of when the prospect of being a starter became real. “(Defensive line coach Chris Kiffin) let me know Fadol wasn’t exactly as healthy as he needed to be. He’s made it very prevalent during camp and even moreso in the practices leading up that I need to be very ready.”

Last season, Youngblood played in all 13 games and started two. He’s started three in his career overall and recorded 19 tackles.

No more tackling
As has been the case with practices under Freeze, tackling was at a minimum during fall camp and is now non-existent with game week finally here. Ground tackling was removed from practices before Sunday’s first practice inside the newly renovated Vaught-Heminway Stadium, and there is no plan in place to get more physical before the lights come on at Camping World Stadium on Monday.

“Well, we are through on the tackling,” Freeze said. “It is time to get our teams healthy and fresh and ready to get to the game. I don’t know that I am ever totally happy with the way we have tackled, but we are working individual tackle drills every day. But it is still not the same.”

Are you ready for some football?
The NFL is still wrapping up its preseason schedule and will not officially kick off its season until Sept. 8. That means the only Monday Night Football that will be taking place before that will be played between the Rebels and the Seminoles.

It is another chance at national exposure against a top-ranked opponent for Ole Miss, which reveled in being the only primetime game in January during the Sugar Bowl.

The prospects of showcasing how far the program has come under Freeze’s tenure on the national stage is appealing to him — and a chance to push the NCAA investigation discussion to the background.

“It’s a tremendous opportunity,” Freeze said. “We love knowing that all eyes of the nation will be on us. It is a chance to take another step in expanding the brand of Ole Miss. … There’s no new shows coming on, no other football on. So it’s a great opportunity, and for us to play on that stage against that quality of opponent, the tradeoff is really nice.”