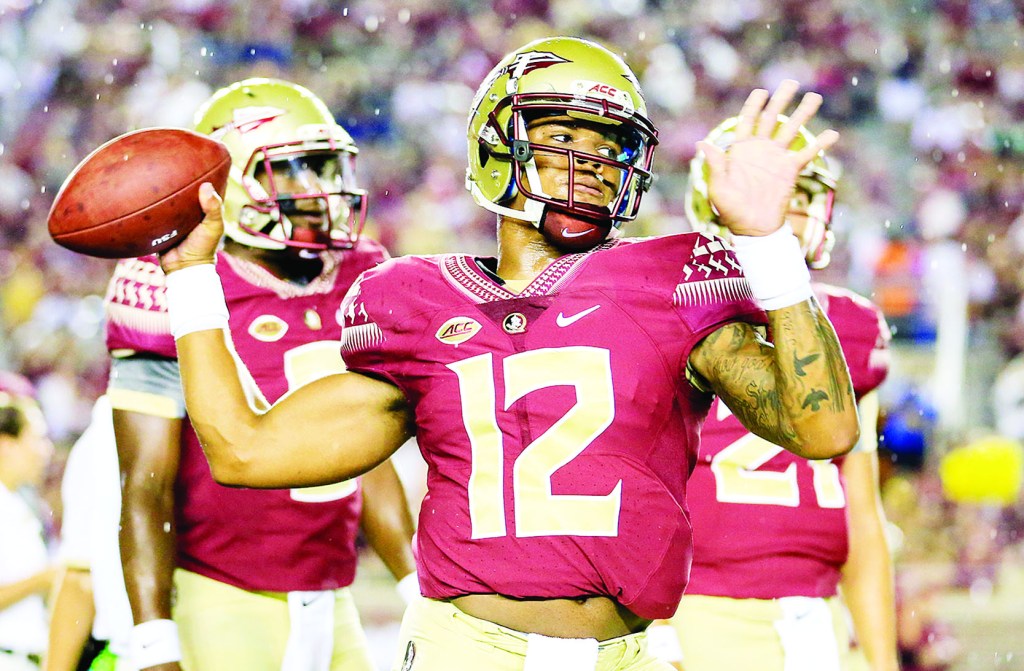 Deondre Francois will get the start at quarterback for Florida State against Ole Miss on Monday. The redshirt freshman hasn’t played in a game since high school. (FSU sports information—Jeremy Esbrandt)

Hugh Freeze knows Deondre Francois from the time he spent recruiting Florida State’s quarterback a couple years back, but Ole Miss’ coach hasn’t seen Francois play in a game since.
In fact, nobody has seen Francois in an actual game since those high school days.

Yet No. 11 Ole Miss is tasked with trying to prepare for what it thinks it will see from the Seminoles’ signal caller, who will take his first collegiate snaps against the Rebels in the teams’ Labor Day opener in Orlando (7 p.m., ESPN). Florida State coach Jimbo Fisher confirmed last week the 6-foot-2, 205-pound redshirt freshman will get the start after senior Sean Maguire went down with a foot injury early in fall camp that required surgery.

Maguire may or may not be available in some capacity Monday with his recovery coming along faster than anticipated, according to multiple media reports, but most if not all of No. 4 Florida State’s offense will be operated by a youngster whose only taste of college competition has come against his own team.

“I don’t know until we play the game which one is going to carry more weight,” Freeze said. “Is it that he doesn’t have the experience or is it that he’s just that talented enough that he gets it done?”

Experience at the position is tilted heavily in the Rebels’ favor with Chad Kelly back for another season, but Freeze and his players aren’t naïve to the fact Francois has talent.

Ranked as one of the nation’s top 10 prospects at the position in his recruiting cycle, Francois was a consensus four-star prospect coming out of Florida’s famed IMG Academy in 2015. He took a year to learn the Seminoles’ offense last season before showing flashes of his ability in April by completing 20 of his 33 passes for 246 yards with two touchdowns and two interceptions in Florida State’s spring game.

Though more of a true pocket passer, Francois can also run a little bit, averaging 6.1 yards on 46 carries during his senior season at IMG. The Rebels are going off the information they do have on Florida State’s offense to get ready.

“Just prepare for their schemes,” defensive end Marquis Haynes said. “We don’t worry about the quarterbacks or anything.”

Weighing potential versus production is a normal crapshoot when it comes to the unknown of facing a quarterback as green as Francois, and it’s no different for Ole Miss’ defense. The Rebels won’t know exactly what they’re dealing with until he takes the field Monday night.

“You could go back and look at different scenarios where there’s been quarterbacks that came out of a high school, and there was one in particular in the last couple of years that I thought, ‘Man, this guy’s going to be phenomenal,’” Freeze said. “Then he got on that stage at a school in this conference, and he didn’t do real well. Then you have on the other hand a Johnny Manziel who comes out of nowhere, nobody’s talked about him and he’s unbelieveable from Day 1.”

The Rebels are using anything they can get to try to be as prepared as possible.

“You go back and look at the spring game and look at the IMG stuff, his mechanics and what kind of player, athlete and thrower he is,” defensive coordinator Dave Wommack said. “That’s about as close as you can get.”