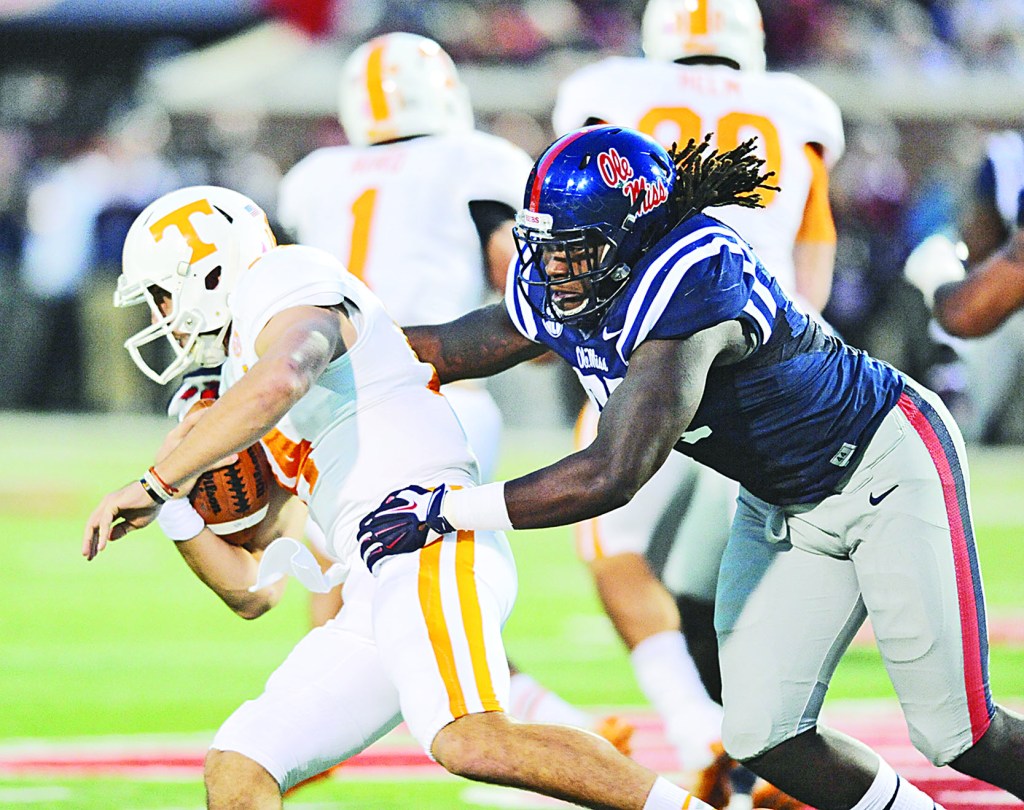 Ole Miss defensive end Fadol Brown, right, returned to practice for the first time since the start of fall camp earlier this month. Brown has been recovering from a stress fracture he suffered last season that required two surgeries. (Bruce Newman)

A trip to Texas seems to have done Fadol Brown some good. Ole Miss’ senior defensive end returned to practice on Tuesday and participated in the full workout.

Defensive coordinator Dave Wommack confirmed Brown’s return but was unable to give a full report on how he looked.

“Brown went through practice today and did all the stuff we needed him to do,” Wommack said after Tuesday’s practice.

Brown traveled to Houston, Texas, last week for what was characterized as a new treatment process on his injured foot after two surgeries to fix a stress fracture suffered last season.

This is the first time Brown has fully participated in any practice since the start of fall camp earlier this month. That leaves only five days between today and Monday’s game against No. 4 Florida State for Brown to get game-ready, and not all of those days will be practice days.

On the depth chart released on Monday, Brown was listed as the No. 2 defensive end on the right side behind senior John Youngblood. Brown’s return to the practice field has not changed Youngblood’s status as the potential starter come Monday night in Orlando.

“(Youngblood) will play quite a bit,” Wommack said. “We’ll have to spell him with (sophomore Garrald McDowell and redshirt freshman Shawn Curtis).”

Wommack also mentioned the ablity to put sophomore tackle Breeland  Speaks on the edge as a third possibilty if Brown is  not able to play at all.

‘Surprise of camp’
The absence of Jeremy Liggins created an even deeper void at left tackle after the departure of Laremy Tunsil last season.

It forced offensive line coach Matt Luke to have to once again shuffle his lineup of guys with Rod Taylor becoming the No. 1 left tackle, according to Monday’s depth chart.
It appears that is because Taylor has impressed Luke the first month of practice.

“I’ve been pleased with Rod,” Luke said. “To me, he’s been the surprise of camp the way he’s competed. His knowledge of the offense. I’ve been impressed with that. He’s always been a great athlete, and that was my thought moving him out there was because he could move his feet so well.”

Taylor entered camp as the No. 2 left guard and played in 10 games, starting in two, last season at right guard.

Part of Luke’s praise of Taylor has been the development off the field the junior from Callaway High School has shown over the offseason and summer.

“I think he’s grown a lot,” Luke said of Taylor’s maturity. “I think he’s come a long way, and I think all of the young men are works in progress and they can continue to get better. From where he came in as a freshman to where he is now, I’m really happy to see him grown up on and off the field.”

Taylor will not be the only one seeing action at left tackle as Luke also stated that Greg Little will see reps, rotating with Taylor against Florida State.

Little is the first true freshman to be confirmed to play in Monday’s season opener, though head coach Freeze rattled off others who might could see the field during his press conference earlier this week, including former Oxford receiver D.K. Metcalf.

Mageo progressing
Freeze mentioned last week that transfer linebacker Rommel Mageo out of Oregon State might not be a starter right out of the gate.

That position was softened a bit as Wommack said he will use Mageo along with Tony Caldwell and DeMarquis Gates in situational settings.

“Rommel has really come on and made some big advances,” Wommack said.