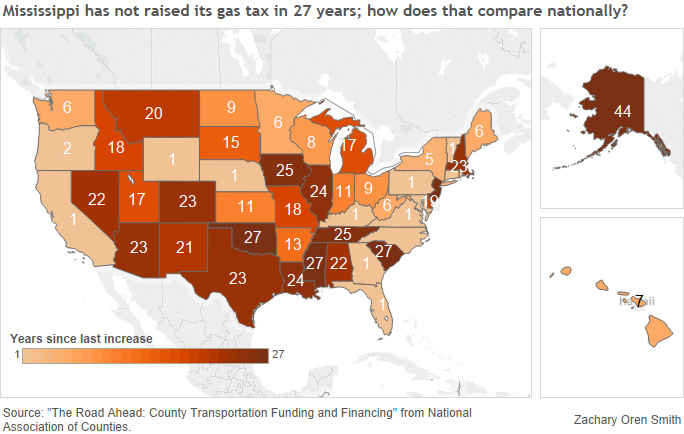 This is the second in a series of three articles about finding solutions to fund improvements to state roads.

The three state Transportation Commissioners agree that more funds are needed to meet the state’s bridge and highway needs.

The trick, they note, is how to get that financing from a Legislature reluctant to raise taxes or add new ones.

Though they note that there are many avenues for Mississippi to invest in state infrastructure, both Commissioners Tom King and Dick Hall said the quickest method might be to raise the state fuel tax.

“I believe that now would be the time to increase the fuel tax,” King said. “In 2017, it will have been 30 years since it was last adjusted.”

“The price of gasoline is lower than it has been,” King continued. “(Cars) get so many more miles per gallon. I think in a short time, the next ten years, they will have an increase in the fuel tax. That’s the simplest, as a good area for commercial development.

“There’s a lot of workforce near Calhoun,” Maynard said.

Maynard pointed out that along the Highway 6 corridor would be another good area for industrial parks, also identifying the recently closed Roseburg facility on old Highway 7 North.

A couple locations heading toward the Panola County line could be zoned for commercial development.

The committee also believes the Highway 30 intersection with Campground Road where two pieces of land are unoccupied near the Shell gas station and Little John’s.

“It’s well traveled and I could see commercial development there to service Woodson Ridge and people on 30,” Frye said.

There’s also a trailer park planned in the area for the near future.

The committee also discussed the Oxford Springs development near Abbeville, as well as the FNC Park area where a PUD development is planned along the Toby Tubby Parkway that includes mixed use development.

The committee is scheduled to meet again Sept. 27, while Mike Slaughter and Associates develops a draft of the committee’s findings.

The county is in the midst of updating the 2008 comprehensive plan and hopes to have it finalized later this year.