Tropical Storm Hermine 2016 is on a direct path to Florida, and the storm could become category 1 Hurricane Hermine before it makes landfall. 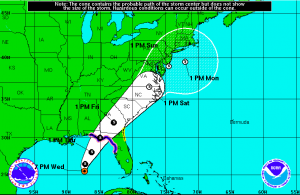 Tropical Storm Hermine 2016 is on a path to Florida for a Friday strike.

From the National Hurricane Center this evening: The center of Tropical Storm Hermine was located near latitude 25.5 North, longitude 87.4 West.  Hermine is moving toward the north-northeast near 8 mph (13 km/h), and this motion with an increase in forward speed is expected to continue through Thursday.  On the forecast track, the center will be near the coast in the warning area Thursday night.

Recent reports from a NOAA Hurricane Hunter aircraft indicate that maximum sustained winds have increased to near 50 mph (85 km/h)with higher gusts.  Additional strengthening is forecast during the next 36 hours, and Hermine could be near hurricane strength by the time landfall occurs.

Tropical-storm-force winds extend outward up to 125 miles (205 k) from the center, mainly to the east and southeast.

From forecasters at The Weather Channel regarding the expected storm surge: “The combination of heavy rainfall and storm surge around the time of the system’s landfall Thursday night or early Friday could combine to produce life-threatening flooding along parts of Florida’s Gulf Coast.

Here are the potential peak water rise forecasts from the NHC if it occurs at high tide: