Grenada will tell Lafayette ‘more about who we are’ 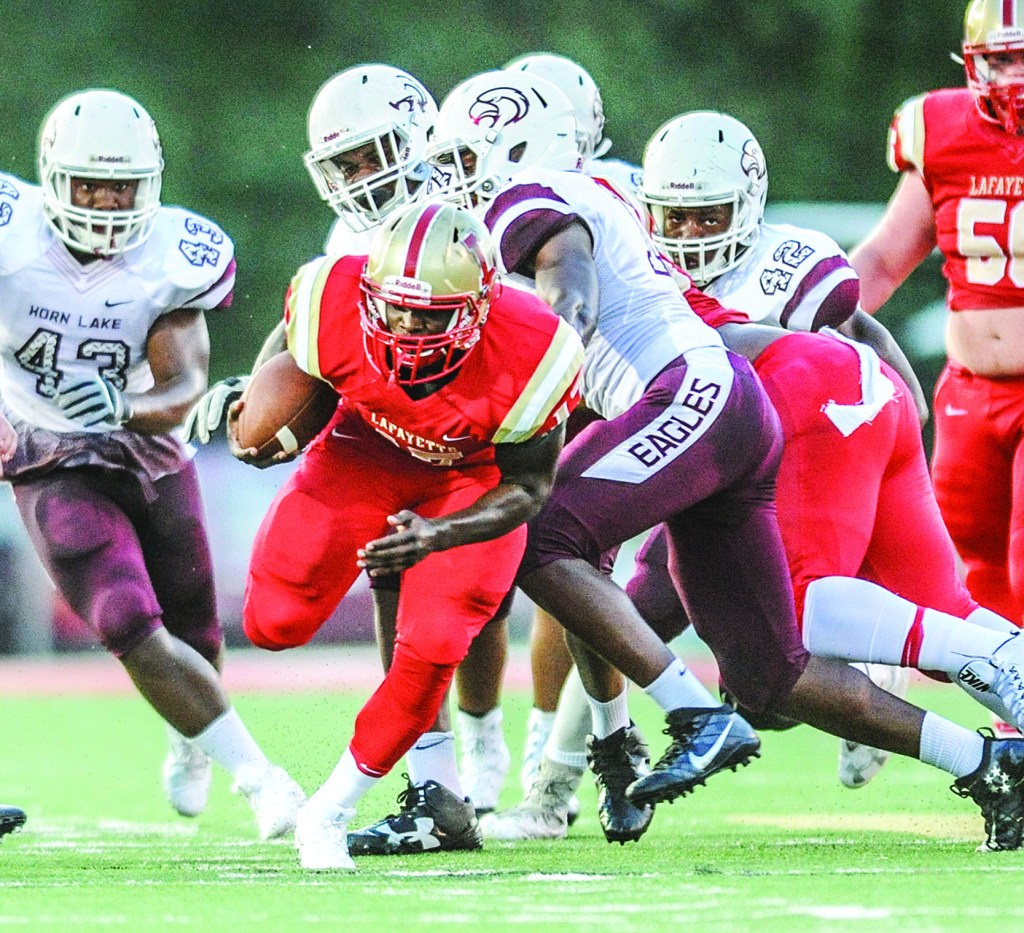 Running back Jamarcus Quarles and the rest of the Commodores will return to the field for the first time in two weeks when Lafayette travels to Grenada on Friday. (Bruce Newman)

Lafayette has only played one game, so it’s difficult for head coach Michael Fair to get a good feel for exactly where his team is in the young season.

That will start to change this week.

“I think we’ll know a lot more about who we are Friday night,” Fair said.

That’s when the Commodores will hit the road to tangle with Grenada, the top-ranked team in the 5A classification. Featuring a roster with next-level talent, Grenada outscored Cleveland and Greenwood 51-12 in its first two games and enters Friday’s game as the state’s ninth-ranked team regardless of classification.

The Commodores (0-1) have had a little more time than usual to digest the good and the bad that came in their loss to Horn Lake on Aug. 19.  Lafayette used an early bye week to do “a lot of fundamental work,” Fair said, but with 14 days in between games, the opportunity to see how much progress has been made in that area can’t get here soon enough for the Commodores.

“(The players) are just ready to play. They’re tired of practicing and ready to play,” Fair said. “The off week and the bye that we had, it just seems like it’s been a long time. We’re ready to get back in the saddle.”

No facet of Lafayette’s game may be more critical to how the Commodores fare against Grenada (2-0) than the performance of their defensive front seven, which will be tested repeatedly by a bulky offensive line and an array of ball carriers in the Chargers’ run-heavy offense.

Junior Deon House leads the attack with 254 yards and three rushing touchdowns, but Grenada will also line up different players at quarterback to put the ball in the hands of as many athletes as possible. Nine different Chargers have at least one carry this season.

“There was one set they ran against Greenwood where there were nine kids with linemen jerseys on out there in one formation, so they’re coming right at you,” Fair said. “They don’t try to fool you. It’s going to be a battle in the trenches, and that’s what we’re trying to get our kids to understand.”

Offensively, Fair wants more push from his own offensive line after he said the unit “could’ve done better” in the opener. Regular starters Keuntae Booker, Matt Toles and Drew Tapp will be joined by Luke Gossett and Hunter Chance up front this week with left guard Tyler Allen still out with a minor knee injury, and it won’t be easy against a Grenada defense led by Mississippi State linebacker commit JJ Russell and safety C.J. Avery, a consensus four-star prospect who’s got multiple FBS scholarship offers.

“They just run to the ball well,” Fair said. “There’s always several Grenada jerseys hanging around the hole it seems like. We’ve got to do a lot better job up front offensively to be successful, and we’ve put a lot of emphasis on that these last two weeks.”

The wait for Lafayette is nearly over.

“We have an opportunity to go knock off a really good football team,” Fair said. “We know that we’re going to have to play really well to do that, and to be honest with you, I feel like our kids are up to the challenge. They’re ready to go.”