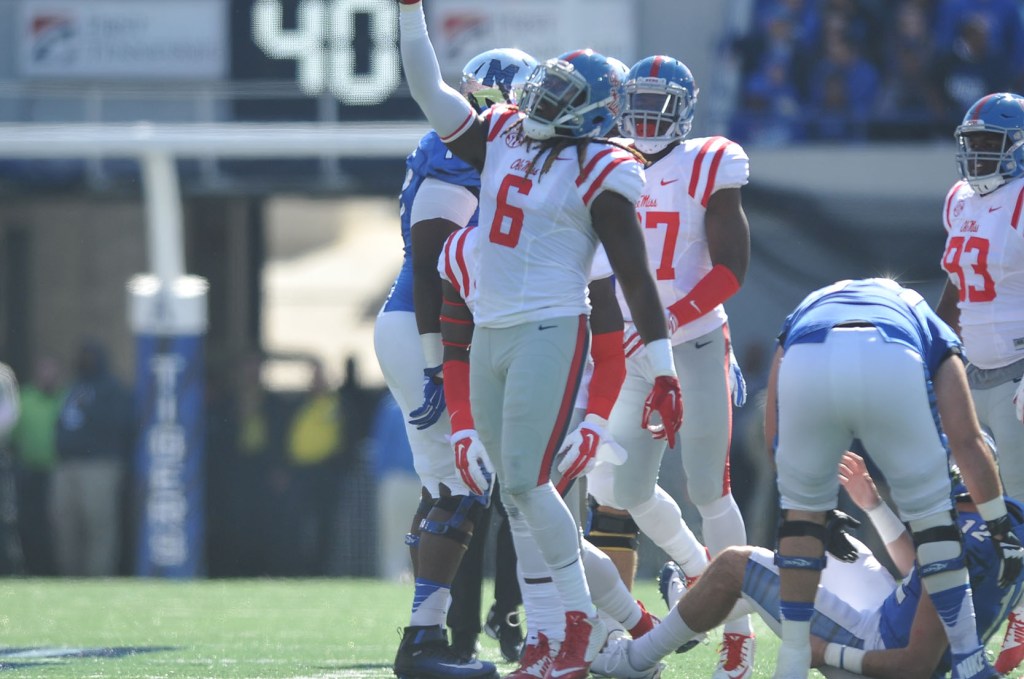 Returning to practice on Tuesday, Ole Miss defensive end Fadol Brown (6) will try to play in Monday’s season opener against No. 4 Florida State, head coach Hugh Freeze said after Wednesday’s practice. Brown has been battling a stress fracture in his foot. (Bruce Newman)

If the last two days are any indication, Fadol Brown will play against Florida State.

“We’ll just keep monitoring it day by day,” Freeze said. “He finished practice. Didn’t seem to be in a large amount of pain or anything watching him move around. … We’ll see how tomorrow feels. That’s usually the real test, but I’m pretty confident he’ll give it a go.”

Brown is working his way back from surgery late last season to repair a fracture in his foot. It’s been a slower-than-expected recovery for the 6-foot-4, 280-pound Brown, who only took part in the occasional position drill in fall camp before visiting doctors in Texas last week to have another treatment performed.

Freeze said Brown has done what he can to keep his conditioning at an adequate level. Senior John Youngblood is in line to get the start against Florida State at the position, but Ole Miss is counting on having Brown, a two-year starter, in some capacity.

“He’s been running in the pool,” Freeze said. “We’ve got things that you can do to take pressure off of (the foot). Surely he’s not in as good a shape as some of the others who’ve practiced every day, but he’s not in terrible shape either. We wouldn’t expect him to go a large amount of plays, but just watching him today, he looked like he could give you 20 to 30 good snaps.”

Sophomore tackle Breeland Speaks could occasionally move out to end if needed to give the Rebels a beefier front that’s likely to see plenty of Florida State star running back Dalvin Cook, but Ole Miss will wait and see before possibly going that route.

“Right now, that’s a last-case scenario,” defensive line coach Chris Kiffin said. “I fully expect Fadol to play and to be able to contribute some.”

Doubling up
With the benefit of having two more days than usual to prepare for the opener, Ole Miss has repeated its practice schedule this week, treating Wednesday’s practice like a typical Tuesday.

The Rebels will spend today away from the practice field before doubling up again over the weekend.

Anderson ‘fine’
Safety Deontay Anderson was fitted for a splint Wednesday, Freeze said, after breaking a bone in his hand during a recent scrimmage, but the true freshman isn’t expected to miss any time. Anderson, a consensus four-star recruit, is running with the second team at rover.