Florida’s panhandle and western peninsula coast will likely be hit with a tropical storm or hurricane in the next two days, according to the latest tropical depression 9 updated track and forecast.

A tropical storm warning has been issued Wednesday morning for a section of Florida’s Gulf coast as a tropical depression approaches.

Tropical depression 9 would likely be named Tropical Storm Hermine or Hurricane Hermine if it develops as anticipated.

The tropical storm warning covers an area from Anclote River to the Walton County-Bay County line (Panama City Beach area). That area is also under a hurricane watch.

At this time, the NHC expects this system to be a strong tropical storm, though near hurricane-strength, as it makes landfall along the Florida Gulf coast Thursday night. However, the intensity forecast for this system still has some uncertainty, for the reason mentioned above.

After its Gulf landfall, the storm will likely track close enough to the coast of Georgia and the Carolinas Friday and Saturday to bring wind and rain, there. 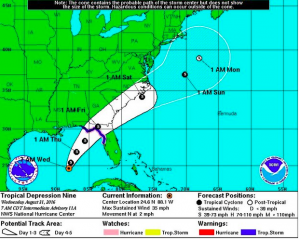 Tropical Storm Hermine or Hurricane Hermine is expected to develop and is on a path for Florida.

This won’t likely be a historically-strong storm, and it should be fast moving by the time it reaches Florida. Still, storm surge along the coast from Panama City to Tampa will be an issue and visitors expected to travel to the area for Labor Day weekend should closely monitor.

The depression is centered about 425 miles (680 kilometers) southwest of Tampa, Florida, and is moving north near 2 mph (4 kph). It’s expected to later curve northeastward.

The National Hurricane Center says the Outer Banks will likely be drenched as a tropical weather system blows by. But forecasters say the storm isn’t expected to surpass tropical-storm strength as it lashes North Carolina beaches through Wednesday.

Officials expected heavy rains of up to 5 inches and winds of up to 45 mph.

Elsewhere, a powerful hurricane threatened to pass “dangerously close” to Hawaii, and a hurricane watch was issued for parts of Florida’s Gulf Coast because of a tropical depression in the Gulf of Mexico.

Business owners on North Carolina’s Ocracoke and Hatteras Islands say they’ve experienced a drop in foot traffic. But by late Tuesday, many tourists had decided to brave the weather. Large waves also attracted surfers from out of town.