Oxford has an affordable housing problem 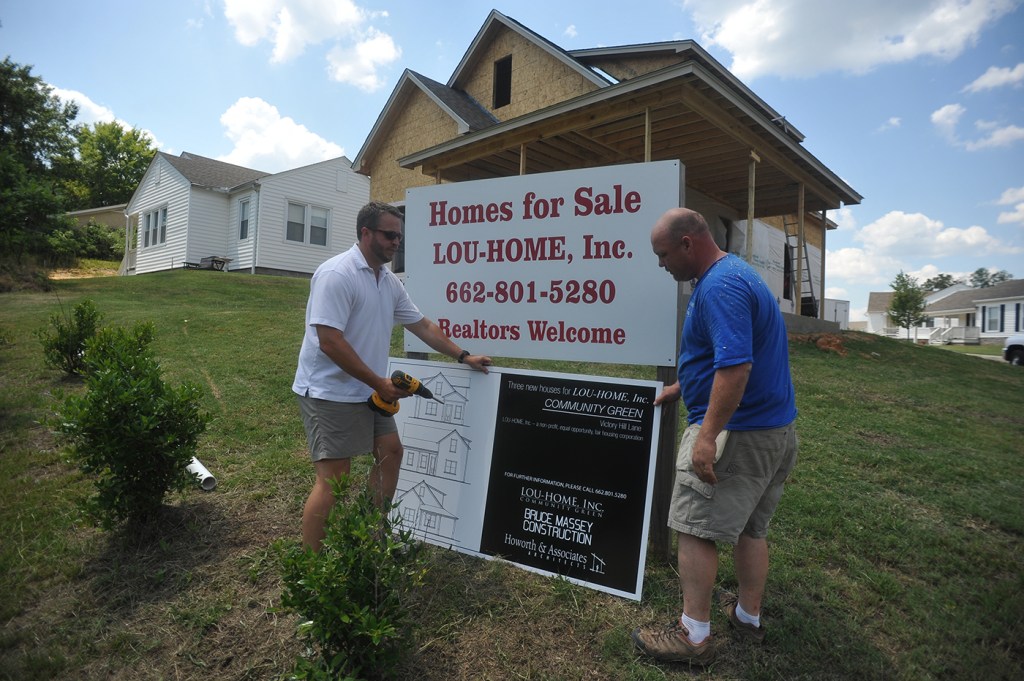 Bruce Massey (left) and Kenneth Mitchell hang a sign as construction on the final three houses at Community Green continues in Oxford, Miss. on Wednesday, June 20, 2012.

Fred Laurenzo believes it’s time to stop talking about needing more affordable housing in Oxford and doing something about it, urging the city of Oxford to take the lead and make a statement by donating about 2 acres of land to LOU-Home to build 10 affordable homes in Oxford.

On Tuesday, Laurenzo met with the Oxford Board of Aldermen and Mayor Pat Patterson during a budget hearing, asking them to consider donating land near the water tower off Molly Barr Road to LOU-Home, a nonprofit organization aimed at providing affordable living to Oxford’s workforce.

“We think the time has come to take concrete steps,” Laurenzo said. “The community is concerned about the lack of affordable housing.”

As Oxford grows, so does the number of people required to provide services, from sanitation workers to teachers to restaurant staff, and Laurenzo said most of Oxford’s workforce can’t afford to live in the city.

“We need 200 affordable single family homes and 400 affordable rental units just to make a dent,” he said. “And there’s no indication the market will supply it. The workers on whom our community depends can’t own a house here.”

Jonathan Maddox with Howorth and Associates Architects, who provided pro bono work for LOU-Home, presented a preliminary site plan, showing 10 lots on the property. The homes would be 1,200-square feet with three bedrooms and two bathrooms on smaller lots, which he said is more affordable to maintain.

The sketches were only a proposed site plan and renderings of what the homes could look like, to give aldermen an idea of what Lou-Home wants to accomplish.

Laurenzo said the city would not need to contribute anything toward the project other than the land, and eventually maintenance of the road inside the proposed subdivision.

“We have been approached by a local bank who is interested in help us and giving us a line of credit, but we can’t move forward unless we have land,” he said. “If anything, it would add to the city’s tax base.”

Laurenzo said LOU-Home would raise funds through donations and federal grants and actively pursue help from the contractors in the community to keep costs down. The homes would be available to only those residents who make 80 percent below the county’s poverty level.

Lou-Homes was formed in 2007 to help manage Community Green, the 20-house subdivision off Molly Barr Road that was created when the University of Mississippi donated old, staff homes they were removing off campus to make room for student housing. The homes were picked up and moved to their current location and then renovated and repaired by LOU-Home. Homeowners were selected through an application process. Part of the agreement was that the applicants had to agree to own the home for at least 10 years before selling. Like most subdivisions, there’s now a homeowners association and strict covenants, and Laurenzo said the new subdivision if the aldermen agree to donate the land, would work the same way.

Alderman John Morgan said the land is a “huge asset” to the city and isn’t sure the city should be in the housing business.

Mayor Pat Patterson asked if Laurenzo had approached Lafayette County Board of Supervisors about contributing to the housing project. Laurenzo said he has begun that process.

“I don’t think we should refuse to do something positive until the county does something,” Laurenzo said.

During budget talks this summer, aldermen discussed using the land for climate-controlled storage units as the city is quickly running out of room to store files.

Maddox said the site could be arranged to allow for storage units on site, below where the homes are proposed to be built.

Alderman Janice Antonow said the regardless of the board’s decision on Laurenzo’s proposal, the city needs to write into its code incentives for builders to build affordable housing when constructing other developments.

Patterson said he is going to talk to county leaders about agreeing to join the city in contributing $50,000 a year toward an affordable housing fund.

“I’m not willing to go this alone,” Patterson said about the lack of affordable housing in the LOU community. “The county will need to step up and help with this issue as well.”

Patterson said the LOU-Home’s land donation proposal would be put on the agenda for the Sept. 6 Board of Aldermen regular meeting for the aldermen to discuss and consider.