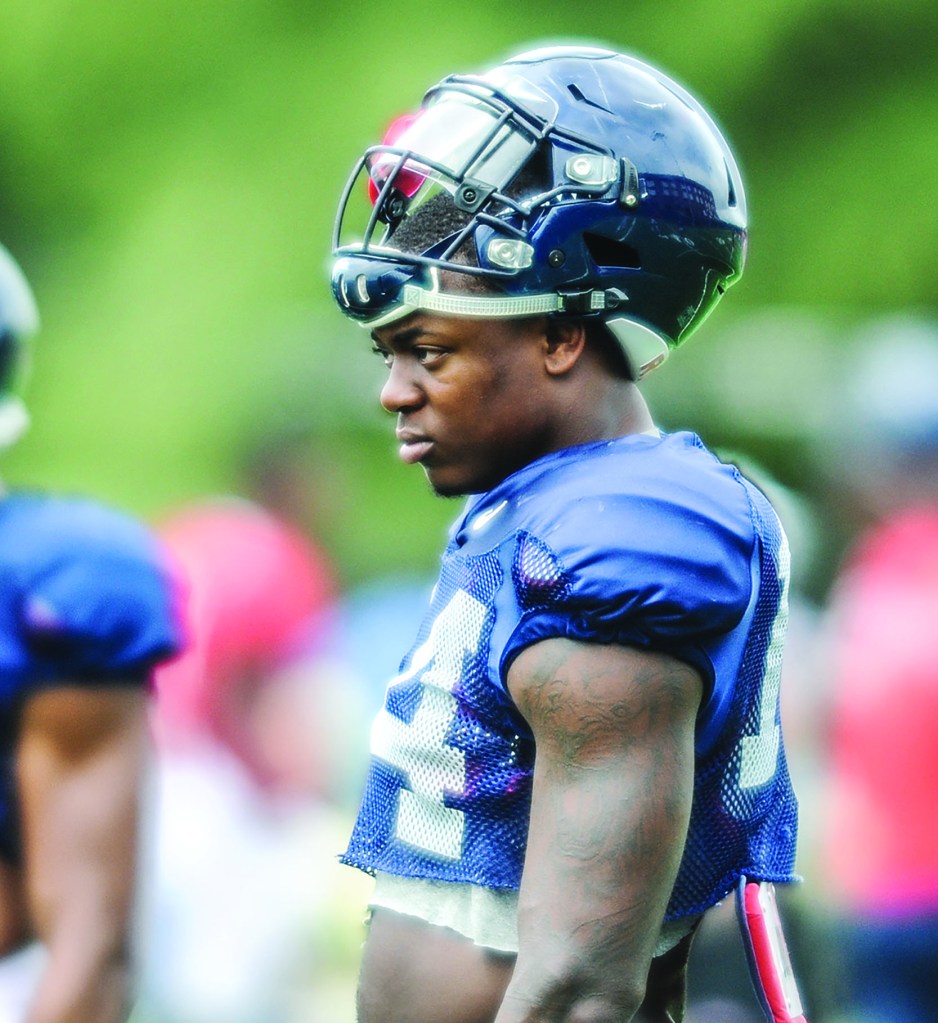 Third-year sophomore end Victor Evans will have a larger role for Ole Miss this season as part of a defensive front that's looking to go 10 deep. (Bruce Newman)

Robert Nkemdiche, Woody Hamilton and Channing Ward may be gone, but the depth along Ole Miss’ defensive line still exists.

Now it’s up to defensive line coach Chris Kiffin to sort through the different options to figure out exactly how many players he can count on this fall.

The starting four isn’t a mystery while others have established themselves as the first options off the bench, but in the rugged Southeastern Conference, the 11th-ranked Rebels want to play as many as 10 linemen to keep everybody fresh. It’s the back end of that rotation that Kiffin is still working to nail down.

“I always like to say eight to 10 because I do believe we’re two-deep,” Kiffin said. “Maybe still trying to figure out who nine and 10 are. When we get in a game situation, we’ll see how they perform when the lights are on, but I do feel like we’re two-deep right now.”

Marquis Haynes and Fadol Brown are back as bookends when Brown is healthy. Senior John Youngblood is in line to get a majority of the snaps on the strong side in Monday’s opener against No. 4 Florida State (7 p.m, ESPN) with Brown recovering slowly from surgery on his fractured foot.

“We have got other good players that have taken a ton of reps,” head coach Hugh Freeze said.

Sophomore Breeland Speaks will step in for Nkemdiche while senior D.J. Jones will take over for Hamilton as the full-time nosetackle after playing in all 13 games last season with three starts. Veteran Issac Gross is healthy after season-ending neck surgery last season and will rejoin the fold on the interior, which will also include big-bodied freshman Benito Jones, an early enrollee who turned a strong fall camp into a spot on the two-deep as Speaks’ primary backup.

“As a true freshman, having him here in the spring was huge,” Kiffin said. “We’re going to find out what he can do, but I have full confidence that he can play right now at this level.”

Sophomore end Victor Evans will see a dramatic increase in his role this season after redshirting in 2014 and playing primarily on special teams a season ago. Evans will be first off the bench to spell Haynes, a rise up the depth chart Kiffin said the 6-foot-3, 240-pounder earned.

“I’ve told everybody in this building that I think Victor had not the best camp of anyone but the most consistent and most surprising where you feel good about a guy,” Kiffin said. “He hasn’t had a big role in the seasons past. He’s played a couple snaps here and there, but he’s definitely a guy now who’s in the two-deep and you can count on to give Marquis a break at any time because you know he’s going to play good football for you.”

Other contributions up front could come from any number of candidates.

Junior tackle Herbert Moore is back after missing all of last season with a torn ACL. Sophomore Ross Donelly and redshirt freshman Austrian Robinson are also competing for time on the interior while junior college transfer Josiah Coatney, a late addition to Ole Miss’ most recent crop of signees, could play inside or out.

True freshman Charles Wiley has drawn praise from teammates and coaches for his athleticism on the field, though the 6-2, 253-pound end won’t play while the legal process plays out following his arrest on  a domestic violence charge earlier this summer.

Regardless how it all shakes out, Kiffin said there are enough quality pieces for the group to once again be a strength for the Rebels this season.

“I think they can help us win any game on our schedule,” Kiffin said. “I think we can really set the tone, especially for our defense, as well to be one of the top defenses in the country. That’s kind of our goal, and if we’re not shooting for that, something is wrong with us.”