Oxford bounces back with win over Madison Central 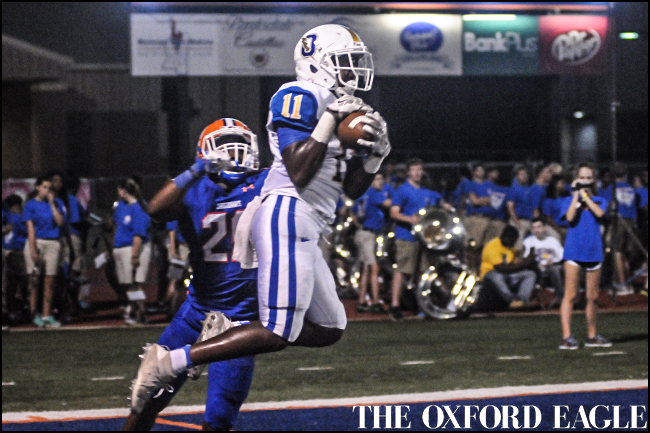 MADISON — A third straight loss to Starkville a week ago may have had some questioning if the 2016 version of Oxford High football would be able to contend for a fourth straight trip to the MHSAA Class 5A championship.

The season is still in the early stages, but if Friday was any indication, the Chargers might still be a force to reckon with in 5A.

Oxford avenged a loss to Madison Central a year ago on its own field by returning the favor with a 21-17 victory at Madison Central High School. It was a game where things that did not go right for the Chargers (2-1) a week ago went perfectly, or at least better, this week.

“I think it is a good confidence booster,” Oxford coach Chris Cutcliffe said. “(Madison Central) is a great 6A opponent on the road. To get a win after a tough loss last week, that was really good to see.”

One of the biggest concerns Cutcliffe had after the Starkville loss was the third-down struggles his team had on both sides of the football. On Friday, that became one of its biggest factors for success. Defensively, the Chargers went 9-for-10 on third-down opportunities, forcing Madison Central (1-2) to punt five times and attempt three field goals, making only one of them.

The way the game started, it did not give off the feel that Oxford’s defense would be as stout as it became. The Jaguars got on the board first, and quick, with a 42-yard touchdown pass from quarterback Jack Walker to tight end Hunter Blalock on the fourth play of the game for the 7-0 lead.

It was another slow start for Oxford, punting on three of its first four possessions. The other drive stalled after a fumble by quarterback John Reece McClure.

The offense started clicking on the final drive of the first half. After a defensive stand at the 5-yard line forcing Madison Central to come away with only three points, Oxford was trailing 10-0 with just over a minute remaining. The Chargers capped off a 13-play, 68-yard drive with a 16-yard pass from McClure to sophomore receiver DeDe Pegues and cut the deficit to 10-7 at the break.

“We got on our heels a little bit and got worried about letting (Oxford) in the end zone,” former Lafayette coach and current Madison Central defensive coordinator Eric Robertson said.

Oxford carried that momentum into the second half and marched 64 yards down the field, using a 1-yard touchdown run by Hiram Wadlington to take a 14-10 lead, its first of the game.

Both teams traded punts until Madison Central broke through the goal line once again with a 5-yard run by senior running back Gabe Short, retaking the lead 17-14.

McClure recorded his second turnover of the game on the following drive, this time an interception by Madison Central cornerback Demario Mays. The defense gave the Chargers the ball back for what felt like one last chance. After a holding call on the Jaguars negated an incompletion on a third-and-6 and kept Oxford’s drive alive, McClure hit receiver Barry Flowers for a 52-yard touchdown for the winning score with 3:01 left in the game.

McClure finished 17-of-27 for 242 yards, two touchdowns, an interception and one fumble. Flowers ended the game as the top receiver with seven catches for 156 yards and one touchdown.

As had been the case all second half, the Oxford defense shut down the Jaguars, forcing an incompletion and sacking Walker two times to ice the game.

Oxford returns home next Friday for the annual Crosstown Classic with rival Lafayette.

Ole Miss’ opener against Florida State is a sellout