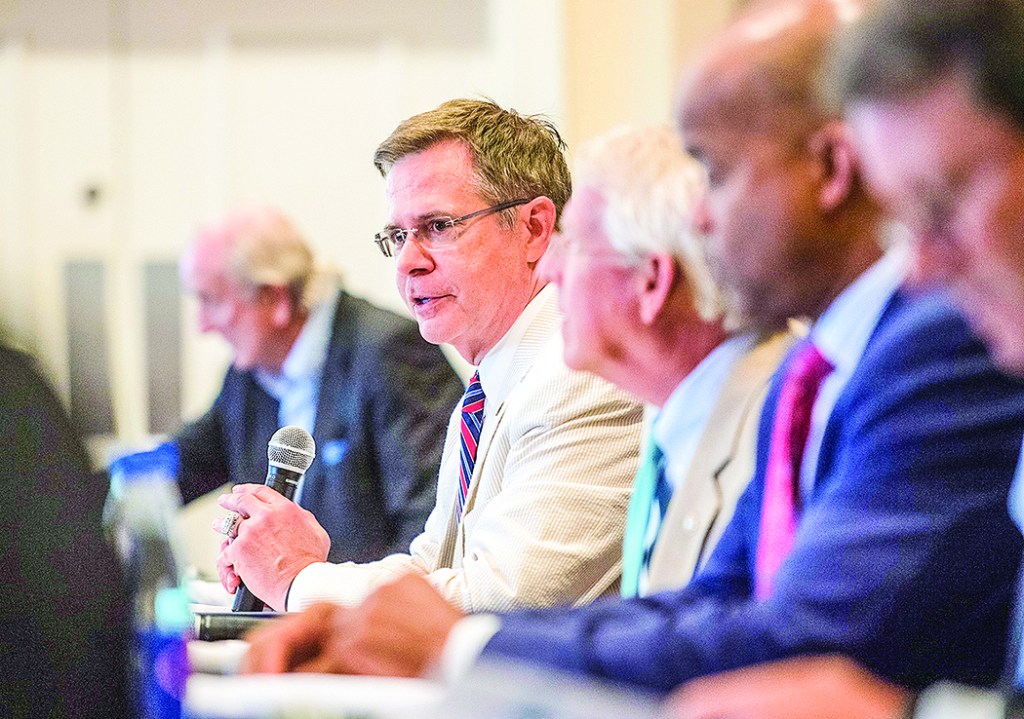 Chancellor Jeffrey Vitter and the University of Mississippi hosted U.S. Sen. Roger Wicker and technology industry leaders Wednesday for the UM Technology Summit, at which the senator and others agreed that the need for more science, technology, engineering and math students will continue to grow.

The summit brought together longtime professionals from the computer, telecom, internet and cyber security industries, among others. They discussed advances on the horizon and ways that universities can help industry meet its new workforce demands and spur entrepreneurship.

The Tech Summit also complemented many of the university’s recent efforts in this area, including the new STEM building and the chancellor’s initiative to establish a leading, interdisciplinary research and education program in data science.

Wicker, who chairs the Communications, Technology, Innovation and Internet subcommittee of the Senate Commerce Committee, among other assignments, touted the university’s vision for the $138 million STEM education building.

The building, envisioned as the crown jewel of the university’s Science District, is designed to facilitate project-based, active learning that cross-trains students beyond single-subject expertise. The goal is to have the 200,000-square-foot building completed by fall 2018.

“We have got the STEM building and ground is already broken,” Wicker said. “It’s a two-year effort, but it’s going to be the next big thing for Ole Miss.”

Wicker, who opened the summit with remarks at the Overby Center for Southern Journalism and Politics, gave an overview of the future of technology and his work in Washington on those issues. He noted that more than 50 percent of Mississippians live in rural areas and half of them lack broadband internet service, but efforts to expand that access are underway.

“Our state and this university are not only a vital part of technology and internet progress today, but in many important respects, we are leading the way,” Wicker said. “It is, in fact, our problems and our unique challenges in Mississippi that are causing us to have to be a world leader.”

For example, UM’s Diabetes Telehealth Network is the first of its kind in the nation. In Sunflower County, some 200 diabetes patients were given a tablet computer that allows them to communicate with their doctors at the University of Mississippi Medical Center Jackson.

“In two years, hospitalizations of these chronically ill diabetes patients have been virtually eliminated because of this program that we’re doing,” Wicker said. “This is today’s Ole Miss, and we ought to be proud of it.”

The next goal for the program is to expand it to 20 percent of the state’s chronically ill diabetes patients, he said. Some projections suggest that it could save Medicaid $190 million annually, while greatly improving health in Mississippi, the senator said.

Another program in the works would allow physicians to communicate with paramedics and patients in ambulances en route to UMMC. The service could become available in early 2017.

“We will be the only state doing this in the nation because we have to, because we’re rural and we have a connectivity problem,” Wicker said.

Following Wicker’s remarks, panelists conducted a roundtable discussion at the Inn at Ole Miss. There, industry professionals and tech entrepreneurs underscored the need for more STEM-trained professionals to meet future demands on their industries.

Vitter concluded the summit by thanking Wicker for his “insightful leadership” and the panelists for sharing their experience and expertise.

“It has been extraordinary to explore the future of technology and the role of higher education, UM in particular, with these thought leaders,” Vitter said.

“The University of Mississippi is well-positioned to be a national leader in producing STEM graduates educated in a new paradigm that prepares them for the global, fast-paced, team-oriented workplace of the future. We look forward to continuing the dialogue on addressing the challenges of today and growing the opportunities of tomorrow.”