Time to get your annual flu shot 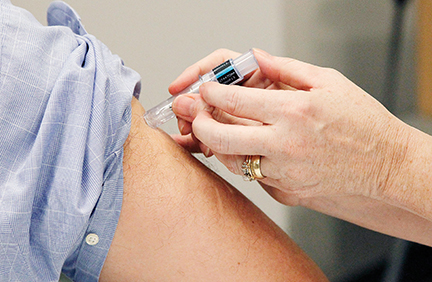 Flu season has not yet arrived in full force, but local physicians are reminding residents that it’s never too early to get vaccinated.

Dr. Will Dabbs and Dr. David Coon with the Urgent Care Clinic of Oxford said they will begin administering their flu shots in a few weeks.

“There are a variety of flu injections on the market, but the emphasis by the CDC (Centers for Disease Control) is less on which type to get and more on just getting  an injection,” Coon said. “They are specifically recommending against the nasal spray for 2016-17.”

The flu vaccine is recommended for all people over six months of age beginning in the fall, according to Coon. The CDC started this universal recommendation in 2010.

According to Coon, there is a higher dose approved for persons over 65 years old. There are shots for three strains of flu and some for four.

“Getting the shot drastically reduces the likelihood of contracting the infection and the morbidly and mortality associated with it.,” Coon said. “Complications can  include pneumonia, respiratory failure and circulatory collapse. The CDC estimates between 1977 and 2007 as many as 49,000 deaths occurred related to influenza. 90 percent were 65 and older.”

Currently, flu levels are low with the flu season usually peaking in January.

What’s the best way to avoid the flu?

“Get a vaccination,” Coon said.  “Wash your hands. And if you have a febrile respiratory illness, avoid the public as much as possible.”