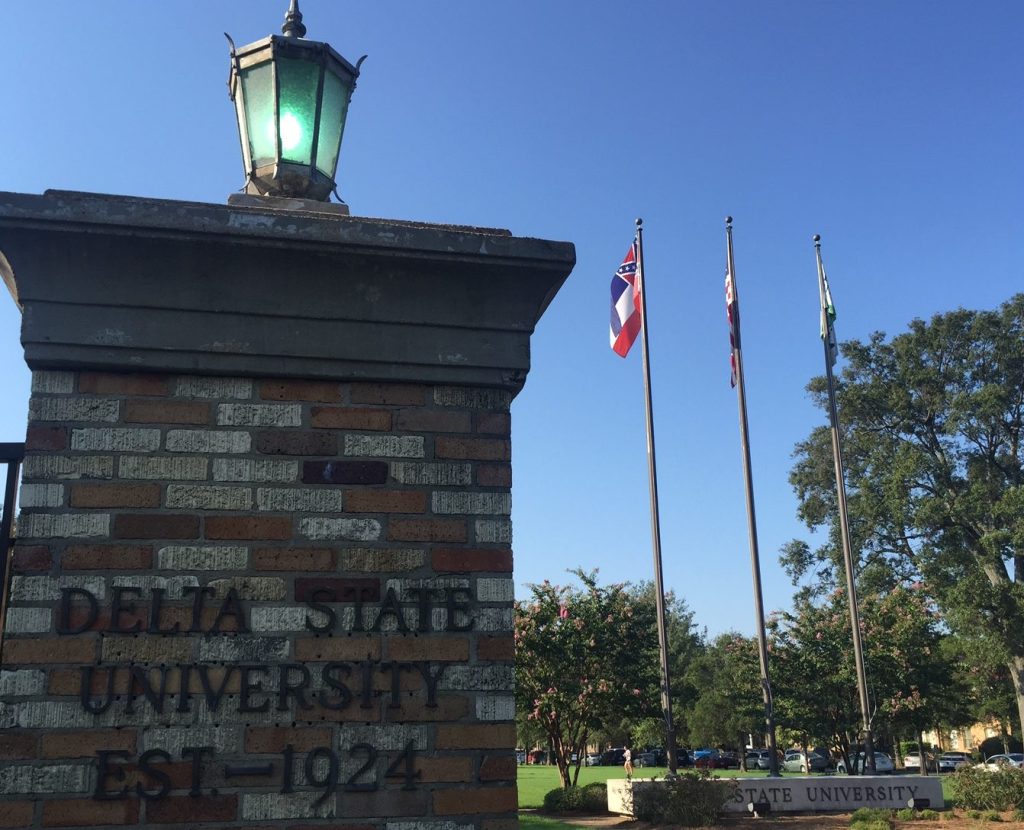 Above the quad, the acres of grass that serve as the front yard of Delta State University, flies the state flag of Mississippi.

As of this week, that is the only spot at a publicly funded Mississippi university in which the flag, containing the Confederate battle emblem, flies in an official capacity.

After the June 2015 church shooting in South Carolina, the state flag became the center of state and national attention, with calls for it to be changed to remove the former Confederate battle banner met with protests that the state’s heritage should not be quickly abandoned.

The Delta State Faculty Senate began discussing the flag issue in the fall of 2015. The Faculty Senate sponsored a flag survey sent to professors on campus last school year. In the spring of 2016, the Student Government Association sent its president, along with the seven other universities’ student government leaders, to Jackson to meet with House Speaker Philip Gunn about the flag. Delta State President William LaForge has met with faculty members about the flag several times in the past year.

A number of those here who spoke with Mississippi Today this week said that conversations on campus and in Cleveland have often jumped over the usual genteel Southern greetings and gone right into the flag debate. Faculty members, students and administrators alike said the university’s stance on the flag has brought pressure to bear that wasn’t felt a week earlier.

“We have established, firmly, that we don’t like the flag. We want it changed, and I heartily embrace that,” LaForge told Mississippi Today.

“We’re not trying to beat our breasts and say we’re last or first or anything else,” he said. “We’ll be reflective about it at the end of the day, and I really want to rely on the good discussion that I know smart people on this campus will make.”

The desire of many at Delta State for Mississippi policymakers to change the flag is evident, yet it still flies on campus. With last week’s decision to remove the flag at the other universities, the baseline question in Cleveland — what should be done about that flag? — is more timely and pressing than ever.

Other considerations will influence the university’s ultimate decision:

• Is removing the flag — which LaForge likened to “nothing more than a protest” — likely to convince lawmakers or state officials to change the state flag?

• Will state appropriations for the university — which have decreased in recent years along with other state universities — be lowered further if the flag is removed?

• Will pro-flag students, faculty and alumni protest a decision to stop flying the flag?

“We’re facing the issue on this campus when I’m fighting for students and budget matters, and we’re having to deal with this as an insular issue,” LaForge said. “It’s clutter and noise that we don’t need, but we have to deal with it. So, when is enough enough?

“We’re not leaving it up because we’re trying to be defiant. It’s because taking it down is not sufficient,” said Christopher Jurgenson, Faculty Senate president and assistant biochemistry professor. “In the next week or so, the Faculty Senate will meet and determine what do we do to go forward, and how does this flesh out. Where do we go with this? It ultimately depends on what everybody, collectively, at the university thinks.”

Conversations about the flag this week with Delta State students, who represent a sampling of most Delta towns, are indicative of the racial polarization of the region.

As is the case at many of the state’s universities, the flag is displayed on bumper stickers or tags on many students’ vehicles. Other students hang alternative state flag banners from their dorm room walls.

For every student on campus who opposes the flag on campus, a flag supporter is likely strolling alongside them on the sidewalk.

“I hope this isn’t too offensive, but I really believe that if you think the school should take down my state flag, you can go to a private school or another state,” said Mary Mac Bryant, a senior from Itta Bena. “This is a state funded college, and that’s our state flag. It’s our heritage.”

Winona native Mikel Sykes was president of the Student Government Association for two years. Sykes, who is black, said he understands the complexity of the issue. While he has worked with administrators, faculty and students in efforts to remove the flag from campus, he understands the other side’s perspective.

He organized meetings with students from both sides of the issue, but no consensus was reached.

“Too often we pride ourselves on the ability to be color blind when in reality we are just turning a blind eye to issues that involve color,” Sykes said. “It is important for us to not numb ourselves to issues of inequality. If we are able to have open and honest dialogues, then we can work together to build a better and more inclusive future for everyone.”

The racial climate at Delta State has been a focus for administrators and faculty members, and the school, while not without its blemishes, has made significant strides in recent years to foster a welcoming environment for everyone, LaForge said.

This August, LaForge expressed commitment to the university’s “core values,” which include “civility, inclusive excellence, and respect for all; integrity and ethical conduct; accountability and transparency; diversity, inclusion.”

“The problem really isn’t black-white,” LaForge said. “It’s dealing with an impoverished, first-generation society that needs education to lift themselves up. So race really is not an issue, per se. Perception on symbols like this enters into the fray, of course, but we’re not checking off boxes of what we’re doing here. It’s integrated throughout our system … It’s just who we are.”

Up to the legislature

While universities have taken their own stances, the state flag issue is in the hands of the Mississippi Legislature. Days after the Charleston shooting, Gunn told reporters he believes it is time for Mississippi to change its flag. Gunn was the only Republican statewide elected official to take and maintain that stance.

Others, including Gov. Phil Bryant, pointed to the 2001 referendum in which 64 percent of Mississippi voters decided to keep the current state flag.

Going into this year’s legislative session, the flag controversy was near the top of the agenda. Nineteen flag-related bills were sponsored in 2016, and 12 would have mandated or suggested a new flag be adopted. Seven of those, though, had direct provisions which would have required public universities to fly the flag — a possibility LaForge mentioned in his comments to Mississippi Today.

All 19 flag bills died in committee, however, and Gunn was left to express disappointment that the Legislature had not acted.

Bryant last week was critical of Mississippi State and Mississippi University for Women for their decisions to remove the flag, saying it’s “troubling” that university presidents are ignoring state code.

“Whatever you think about the flag, Mississippi law requires it be afforded the same etiquette and respect as the American flag,” Bryant told Mississippi Today in a statement. “Like I’ve said before, Mississippi voters should decide what the state flag is or is not. The issue not being on the November ballot is a missed opportunity.”

“The last session of the Mississippi Legislature was a missed opportunity,” LaForge said, after being read the governor’s statement. “I think that’s the crux of the matter here: state government has refused to act on it. If you want to talk about a profile of courage, a failure to act, a reliance on a 2001 referendum with the state, I just … We’re talking about 2016 here.”

The sentiment expressed by every decision maker on campus who spoke with Mississippi Today this week said the flag still flying on campus has little to do with standing behind the symbol and what it represents and more to do with a desire to make a decision that is logical and ultimately influential to state government.

Any decision on the flag will come from the president’s 11-member cabinet, consisting of the school’s four vice presidents, the provost, the athletic director, the director of the alumni association and foundation, the faculty senate president, the chair of the administrative staff council, the student government president and a representative from the academic council.

Just one of those 11 voting members — Vernell Bennett, vice president for student affairs — is black.

The cabinet has a regularly scheduled meeting on Sept 12. The flag issue is not on the agenda. But the sentiments expressed by LaForge, prominent faculty members and students this week hint that the issue will be addressed sooner rather than later.

“This is an opportunity, frankly, for this campus to stand tall and have a civil discourse about an emotional issue, and do it in a calm, collected way,” LaForge said.