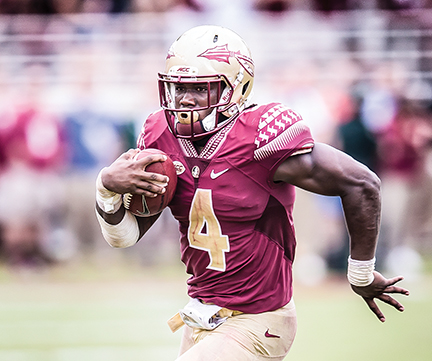 Associated Press Florida State’s Dalvin Cook (4) is the key to the Seminoles offense. The Ole Miss defense must find a way to slow down the junior Heisman Trophy contender.

Marquis Haynes wasn’t being disrespectful of quarterback Deondre Francois or anybody else on Florida State’s offense for that matter. Ole Miss’ defensive end was simply speaking the truth.

“We just worry about their best player and what we need to do to stop him from getting going,” Haynes said.

That would be Dalvin Cook, the Seminoles’ record-setting running back who enters his junior season on the tip of nearly everybody’s tongue when it comes to Heisman Trophy contenders. He’ll be the focal point for Ole Miss’ defense when the teams square off tonight in the Camping World Kickoff in Orlando (7 p.m. CT, ESPN).

Those words aren’t tossed around lightly.

Cook ran for 1,691 yards a season ago, shattering Warrick Dunn’s 20-year record for the most single-season rushing yards in Florida State history, and did it on just 229 carries — an average of 7.4 yards a tote. The total was good for 140.9 yards per game as Cook finished seventh in last year’s Heisman voting.

Former Alabama standout Derrick Henry and Stanford’s Christian McCaffrey finished 1-2 in last year’s Heisman race while LSU’s Leonard Fournette is a trendy pick as a frontrunner this year after finishing as the nation’s third-leading rusher, yet nobody was more explosive than Cook a season ago. The 5-foot-11, 213-pounder led all Power Five conference players with 22 runs of 20 yards or more.

“We have got to be extremely disciplined with fitting our gaps and staying in those gaps because he will entice you,” Freeze said. “They give him the ball so deep in their zone games, he will entice you to another gap and then he will make you pay by hitting the one you just vacated.”

Florida State could lean on Cook even more with Francois set to make his first career start Monday night, and it appears Ole Miss will have everybody it needs at its disposal to try and contain the talented back.

Strongside defensive end Fadol Brown, the bulkiest defender the Rebels have on the edge, has been slow to recover from two surgeries on his fractured foot, but the 6-4, 280-pounder made enough progress to be a full participant in practices last week and should be able to play 20 to 30 snaps, Freeze said.

Senior John Youngblood is in line to get a majority of the snaps at that spot, and tackle Breeland Speaks could slide to the outside to help. Seniors D.J. Jones and Issac Gross are back to man the middle of the defensive line.

“We have got other good players that have taken a ton of reps,” Freeze said. “I don’t know that being without Fadol (for some plays) will make a huge difference on whether or not we stop No. 4. He is going to get his share. He is just that talented I think.”

The proof of Cook’s elusiveness is in the stats, but the Rebels want to limit what he gets after initial contact. That will require a swarming approach in order to get Cook to the ground.

Said Haynes, “We’ve got a real game plan for him, and we’re going to hopefully shut him down.”