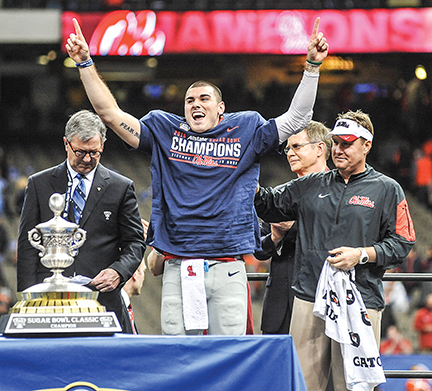 Hugh Freeze is constantly reminded that the NCAA’s investigation isn’t going away.

Ole Miss’ coach doesn’t usually get through a media session without being asked about some aspect of the exhaustive probe, which has gone on for four years and includes nine charges of rules violations during Freeze’s tenure and 13 in all within the football program.

Ole Miss enters the season ranked No. 11 by the Associated Press and is again expected to be a contender in the Southeastern Conference after capping its first 10-win season in more than a decade with a Sugar Bowl win, something that’s easy to forget with an offseason dominated by headlines of what’s going on off the field.

But the games are here for Ole Miss starting with tonight’s Labor Day showdown with No. 4 Florida State (7 p.m. CT, ESPN), and the focus, at least for now, shifts to what the Rebels are doing on the field.

“We’re focused on one thing,” quarterback Chad Kelly said. “We want to win a championship.”

The timeline of those headlines is well-documented.

Yahoo Sports reported in January the school had received a Notice of Allegations from the NCAA alleging multiple rules violations in football, women’s basketball and track and field with the focus of the probe under Freeze centering on former offensive lineman Laremy Tunsil, who was suspended seven games last season after getting free use of loaner cars and an interest-free promissory note on a down payment for another vehicle from Cannon Motors.

Ole Miss agreed violations had occurred in most cases in its response released this spring and self-imposed three years of probation, 11 scholarships reductions over the next four years and recruiting restrictions, but another layer was added to the investigation in April when Tunsil claimed he took money from an Ole Miss staffer.

Last month, Yahoo reported the NCAA had expanded the probe to players at other SEC schools whom Ole Miss had once recruited, offering them immunity from possible sanctions in exchange for truthful accounts of their recruitment.

“(The current players) should be the focus, and they should be the priority and that is what motivates me,” Freeze said. “All of the talk or whatever is about a kid or kids that don’t play here anymore, and these young men chose to come to this university to continue to build a program. When I look at them, I don’t think about the noise. I think about what I owe them to get them ready to play.”

It’s the reason players said there’s been no point in listening to that noise either.

Ole Miss’ hearing with the Committee on Infractions was taken off the summer docket as the school continues to look into Tunsil’s claim, and that still has to happen before a final ruling is reached. That likely pushes any closure to the case into next year.

“I actually don’t pay any attention to that stuff,” receiver Quincy Adeboyejo said. “You basically can control what you can control. We can’t control that, so I just go out there and practice and try not to think about those things.”

Said center Robert Conyers, “We’ve got games to win. It just crossed right over our mind, and we just went back to work.”

The Rebels have plenty of work cut out for them beyond tonight as they chase that elusive Western Division title. Back-to-back games against top-ranked Alabama and No. 18 Georgia await them later this month while trips to No. 4 LSU, Arkansas and Texas A&M are also on the schedule.

Ole Miss is eager to get started.

“We are just ready to put the ball down and play,” Freeze said.