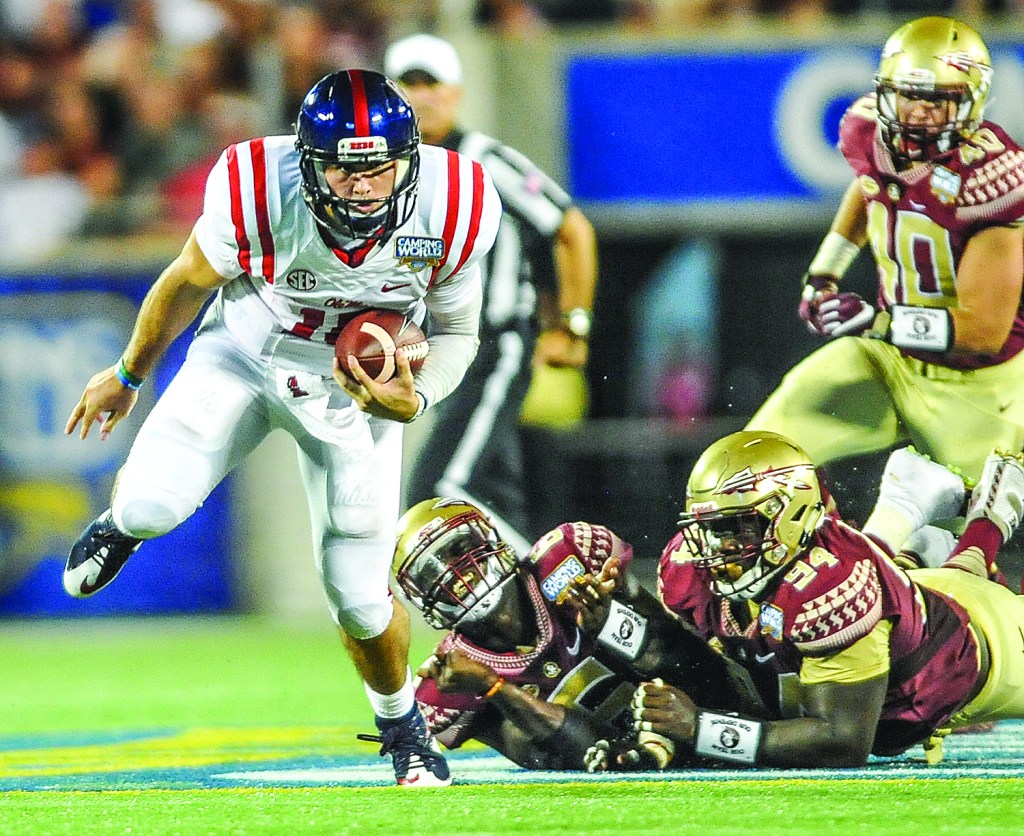 Ole Miss (No. 11) opens its season against No. 4 Florida State tonight (Monday night), Sept. 5, at Camping World Stadium in Orlando.

The game starts at 7 p.m. central time and we will have live updates here. It is televised on ESPN.

You can get the Ole Miss vs. Florida State live stream at Watch ESPN. You will meet a cable subscription to sign in.

We will have live updates and score during the game and postgame recap here. So bookmark this page and return at game time.

Florida State answers with more points on its next possession, another field goal from Aguayo. Francois kept the drive alive for the Seminoles with a 31-yard completion to Rudolph on third-and-15 against some pretty soft coverage from this young Ole Miss secondary. Francois now 29 of 48 for 377 yards passing. Florida State 42, Ole Miss 34, 9:16 4Q

Ole Miss looked as if it had forced a fumble with some pressure on Francois, but the call was changed to an incomplete pass upon review. Aguayo’s 40-yard field goal is good. FSU’s scoring streak is at 33 straight points. Florida State 39, Ole Miss 28, 12:56 4Q

Francois does it with his legs and his arm on FSU’s next drive, capping it with a 1-yard TD pass to Ryan Izzo. Seminoles are on a 30-0 run since late in the second quarter. Florida State 36, Ole Miss 28, 4:12 3Q

Nothing doing for Ole Miss on its next offensive series. The Rebels have run seven plays for minus-1 yard and held it for 86 seconds on their three second-half possessions.

Kermit Whitfield speeds around the end for the 3-yard TD run, and FSU has grabbed all the momentum in a hurry with 23 unanswered points. Seminoles go for two but don’t get it. Florida State 29, Ole Miss 28, 9:16 3Q

Things spiraling here on the Rebels with another turnover after Kelly loses the ball while being sacked. Recovered by FSU. Seminoles have it at Ole Miss’ 11.

Kelly’s pass goes off Engram’s hands and is picked by Marcus Lewis. A 31-yard scamper by Francois gets FSU to Ole Miss’ 1, and Freddie Stevenson punches it in from there, it appears. Score is confirmed upon review, and Florida State has scored the first 10 points of the second half in less than four minutes. Ole Miss 28, Florida State 23, 11:28 3Q

Florida State puts the first points on the board in the second half with Aguayo’s third field goal, this one from 40 yards. Two long passes from Francois get into Ole Miss territory before the Rebels hold. Ole Miss 28, Florida State 16, 12:18 3Q

Ole Miss will take that 28-13 lead into halftime. Florida State took back some momentum there at the end of the half.

Florida State finds the end zone this time on Francois’ 16-yard touchdown pass over the middle to Travis Rudolph. Marquis Haynes applied pressure but got there a second too late. Ole Miss 28, Florida State 13, 0:28 2Q

Cook, FSU’s Heisman hopeful, hasn’t done much in the running game (11 carries, 31 yards), but Ole Miss is losing him out of the backfield in the passing game. He’s caught six balls for 95 yards, and FSU is at Ole Miss’ 15.

Sean Rawlings has moved from right tackle to center. Alex Givens has come in at right tackle. May just be a rotation thing, but it’s something to keep an eye on.

FSU moves into Ole Miss territory after a few Rebel penalties and gets to Ole Miss’ 3 on Francois’ 25-yard pass to Dalvin Cook, who fumbled out of bounds on his way to the end zone. Two passes from Francois into the end zone go through his receivers’ hands, and the Seminoles have to settle for another Aguayo field goal. His 21-yarder is good. Ole Miss 21, Florida State 6, 4:49 2Q

The Rebels get the ball back and continue to move it, this time 72 yards in six plays. Kelly rips a 21-yard touchdown pass up the seam to Evan Engram, whose already got seven catches for 73 yards. Ole Miss’ offensive line is giving Kelly time to operate, and he’s taking advantage. Ole Miss 21, Florida State 3, 9:42 2Q

Ole Miss is marching again at FSU’s 35 after a 13-yard run up the middle by Kelly on third down, but Ole Miss had another player — freshman running back Eric Swinney — carted off. He’ll miss the rest of the game with a left knee injury.

Francois making some impressive throws, and Ole Miss is leaving some receivers alone. FSU with its first real threat at Ole Miss’ 25-yard line. FSU moves to the 9 but can’t get any farther after two throws into the end zone. Ricky Aguayo’s 25-yard field goal is good. Ole Miss 7, Florida State 3, 0:01 1Q

Another three-and-out for Ole Miss’ defense. Rebels’ defensive front is as advertised so far, getting to FSU QB Deondre Francois, who’s making his first career start.

Webster lands awkwardly while breaking up a pass intended for Kermit Whitfield. Trainers are tending to him. He’ll be carted off the field.

Senior Carlos Davis, not Tony Bridges, gets the start at one corner spot opposite junior Kendarius Webster.

Florida State wins the toss, defers to the second half. Ole Miss will start on offense.