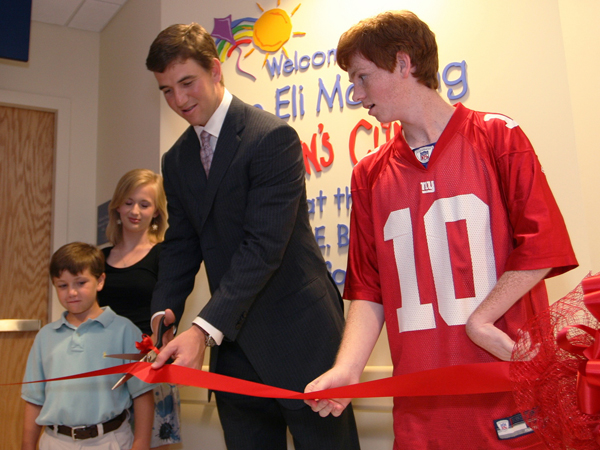 Eli Manning and family cutting a ribbon at the University of Mississippi Medical Center. (Photo: UMMC)

Eli Manning and his wife, Abby, have pledged $1 million to the Children’s of Mississippi $100 million capital campaign benefitting the University of Mississippi Medical Center.

Announced Tuesday in a UMMC press release, the campaign “aims to fund an expansion and update of the neonatal intensive care unit, add more pediatric ICU rooms and surgical suites, create an imaging department just for children and expand the outpatient clinic so that care can be centralized and more convenient for families.”

“Abby and I are the parents of three precious daughters, so we know that the health of your children means everything,” Eli said in the press release. “We want every family to have the best quality care for their children close to home. That’s why we opened the Eli Manning Children’s Clinics at Batson Children’s Hospital, and that’s why we made this commitment to the future of pediatric care at UMMC.”

The Mannings, both Ole Miss alums, will serve as honorary chairs of the campaign and will continue fundraising efforts as part of the project.

Batson Children’s Hospital, the only children’s hospital in the state, has “outgrown its current environment,” said Dr. LouAnn Woodward, vice chancellor for health affairs and dean of the UMMC School of Medicine.

“We have outstanding medical professionals, but for our children to receive the best care possible, we must provide updated space and equipment,” Woodward said. “The need is great. The stakes are high. We all own the responsibility to develop world-class facilities for our children.”

Eli said he and Abby joined the campaign because they want “the very best for the children in Mississippi.”