For some, Labor Day is just another Monday 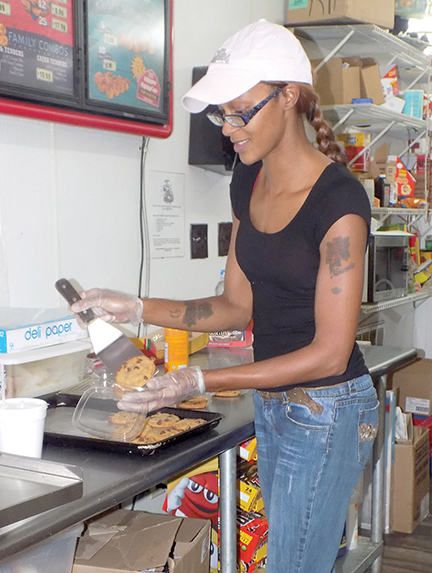 Alyssa Schnugg KeKe Wilson removes freshly baked cookies from the tray at Oxford Spot on Monday. Wilson, like many others, worked the Labor Day holiday.

For many local citizens, Labor Day meant just that – a day to work.

Some jobs just don’t stop at 5 p.m. or on Sundays or even holidays.

Lafayette County Coroner Rocky Kennedy has one of those jobs.

He’s been the county’s coroner since 2009 and was on the clock Monday.

“Unfortunately, Labor Day for a coroner is very much like Christmas Day and Memorial Day and most every other day,” he said Monday.

“I don’t ever ask my deputies to take a call on a holiday so they can enjoy the day.”

Kennedy said Labor Day, even for those who work, is a much-deserved acknowledgment for hard-working people who serve Oxford and Lafayette County each day.

“Let’s not forget the coroners, law enforcement and fire service,” he said, “the guys running the sanitation route, the nursing and medical professionals and all other professions who must carry on as usual in spite of holidays.”

Credit has been given to Peter J. McGuire, general secretary of the Brotherhood of Carpenters and Joiners and a co-founder of the American Federation of Labor, as first suggesting a day to honor the country’s workforce. However, some have claimed Peter McGuire, a machinist, founded the holiday in 1882 while serving as secretary of the Central Labor Union in New York, which adopted a Labor Day proposal and appointed a committee to plan a demonstration and picnic.

The first governmental recognition of Labor Day came through municipal ordinances passed during 1885 and 1886, according to the U.S. Department of Labor. From these, a movement developed to secure state legislation. The first state bill was introduced into the New York legislature, but the first to become law was passed by Oregon on Feb. 21, 1887.

During the year four more states — Colorado, Massachusetts, New Jersey, and New York — created the Labor Day holiday by legislative enactment. By the end of the decade Connecticut, Nebraska, and Pennsylvania had followed suit. By 1894, 23 other states had adopted the holiday in honor of workers, and on June 28 of that year, Congress passed an act making the first Monday in September of each year a legal holiday.

Joshua Bullard was found working at Newk’s on Monday.

He was scheduled to work but said it didn’t matter much to him.

“It doesn’t bother me,” he said about working on Labor Day. “It’s just another day, in my opinion.”

She admitted she would have rather been off, but being a single mother, making money is more important.
She, like Bullard, said she is willing to work most holidays.

“Except birthdays,” she said.