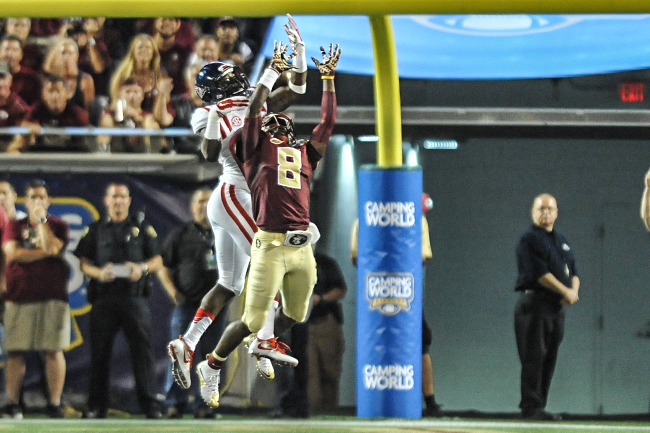 Ole Miss' Ken Webster defends a pass intended for Florida State's Kermit Whitfield in the first quarter at Camping World Stadium in Orlando, Fla. on Monday. Webster was carted off the field after injuring his leg and didn't return. (Bruce Newman)

ORLANDO, Fla. — The injury bug did not forget about Ole Miss on this opening weekend. The Rebels lost two key pieces on both sides of the ball in the first half against No. 4 Florida State on Monday.

The first to go down was defensive back Kendarius Webster, who injured his left knee while jumping for a deep pass by Seminole quarterback Deondre Francois during Florida State’s opening drive. Webster fell down in a heap and did not get back up on his own strength but was carted off the field and didn’t return.

In the second quarter, No. 2 running back Eric Swinney also injured his left knee and was carted off the field from the Rebels’ sideline.

Each injury is crucial, starting with Webster’s. He along with returning safety Tony Conner provided the most experience in the Ole Miss secondary. Without him in the lineup for any amount of time will require Carlos Davis and Jalen Julius, who both saw action on Monday, have to step up and become bigger pieces of the Rebels’ defensive backfield.

“It hurt losing Ken,” Ole Miss coach Hugh Freeze said. “He was a guy that we could leave on an island and have success. We lost him, and it did affect us. We’ve got to get the others ready.”

For Swinney, it depletes an Ole Miss running back corps that was already depleted before the season began. Jordan Wilkins was deemed academically ineligible last month, causing three experienced returners to get trimmed down to two before one snap had been played.

Swinney’s absence saw Judd see more playing time. Judd had eight carries for 44 yards and a touchdown along with Eugene Brazley, who only had two carries for 3 yards.

There was not much to celebrate about in the Ole Miss locker room after the game, but if there were any bright spots to be had, it was the play of the younger players.

Offensively, the highly touted receivers that the Rebels signed back in February showed they might be just as advertised. Fans were not able to get a huge glimpse of A.J. Brown and DK Metcalf before the Seminole defense managed to shut down the offense, but the two did put up some numbers.

Brown finished with 48 yards with 36 of them coming off a busted coverage by Florida State on the opening drive. Metcalf only had 3 yards, but they were part of a 3-yard touchdown pass where he tipped the ball to himself and over a Seminole defender in the back left corner of the end zone.

Greg Little played most, if not all, of the second half at left tackle while on the defensive side, Benito Jones recorded four tackles, three of them unassisted.

Chad Kelly tossed four touchdowns and has led the Rebels to a touchdown on the opening possession of eight of his 14 starts. … This was the second neutral-site loss under Hugh Freeze for Ole Miss and the first in the regular season. The other was the Peach Bowl loss to TCU in 2014. … It is the first loss against a ranked opponent for Ole Miss since losing to Memphis last October.