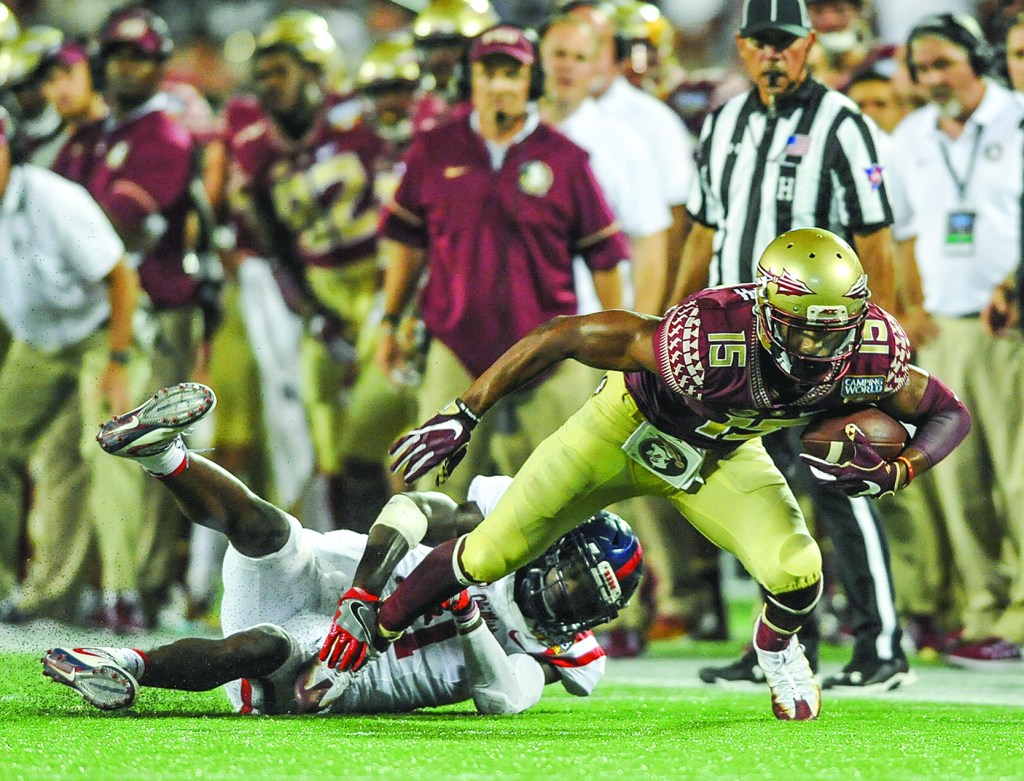 If anyone was going to put up big numbers on Ole Miss’ defense Monday, it was supposed to be Florida State star running back Dalvin Cook.

Instead, it was rookie quarterback Deondre Francois who had a field day against the Rebels.

Making his collegiate debut, Francois eventually settled in to pick apart Ole Miss for 419 passing yards and two touchdowns in helping the Seminoles erase Ole Miss’ 28-6 lead in what turned into a 45-34 Florida State victory in the season opener for both teams at Camping World Stadium in Orlando.

Ole Miss coach Hugh Freeze gave Francois his due, but the Rebels’ retooled secondary made it far too easy at times for the redshirt freshman with blown assignments and soft coverages.

“We have got to improve our calls, our techniques,” Freeze said. “We’re playing some young kids back there, but some of that was we’ve got to coach them better. We’ve got to get them in the right spot with the right technique, but you’ve got to get off the field when you get an opportunity to and give us more possessions on offense.”

The Rebels matched Francois’ youth on the back end of their defense and surpassed it at some spots with sophomore Zedrick Woods and true freshman Myles Hartsfield starting at the safety spots. Ole Miss got even younger when Ken Webster left the game in the first quarter with a serious knee injury, immediately forcing redshirt freshmen Jalen Julius into the cornerback rotation.

Freeze said after the game he didn’t know the severity of Webster’s injury, but Webster said he would miss the rest of the season in a message posted to his Twitter account Tuesday morning, which would spring more youth into action in a secondary that’s still trying to get used to life without Trae Elston and Mike Hilton.

“I think our next best corners are Jalen and (true freshman) Jaylon (Jones),” defensive coordinator Dave Wommack said. “One’s a redshirt freshman and the other one is a freshman. We’re going to have to throw them in the fire.”

Senior safety Tony Conner had a slow return in his first game back from meniscus surgery last season, tallying just two tackles and missing his assignment in coverage on Travis Rudolph leading to Florida State’s first touchdown in the final minute of the first half.

The score cut the Rebels’ lead to 28-13 at the time and ignited a 33-0 run that gave Florida State the lead for good late in the third quarter. The Seminoles put together nine consecutive scoring drives, keeping drives alive by going 9 of 18 on third down with Francois throwing for 201 yards in the final two quarters.

“That’s what your defense has to be able to do is play one snap at a time and overcome the adversity,” Wommack said. “We had plenty of opportunities and didn’t get it done.”

Losing Webster affected some of the Rebels’ aggressiveness in coverage, Freeze said, but it got too loose at times with Francois finding plenty of open receivers underneath. It’s something Freeze said he and his staff will evaluate this week leading up to the Rebels’ home opener against Wofford on Saturday (3 p.m., SECN).

With Alabama and Georgia still to come this month, the Rebels have to tighten it up in a hurry.

“We have to get better at playing fundamental, disciplined technique football,” Wommack said. “Until we decide to do that — and that’s ultimately my responsibility — we won’t be a very good defense. We’ve got a lot of work to do in that area.”