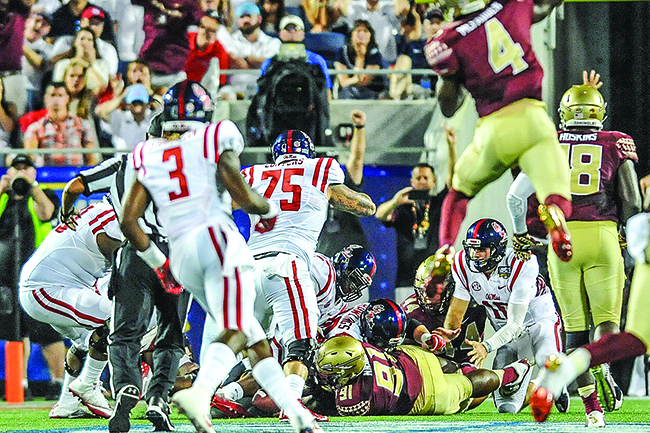 ORLANDO, Fla. — Ole Miss was sending a statement. Right up until the moment it wasn’t.

In a primetime opener on a national stage — a top 15-matchup between the Rebels and No. 4 Florida was the only game on Monday Night Football last night — the Rebels were taking it all out on a team playing just a few hours away from home with more than half of the fans watching inside Camping World Stadium backing the local Seminoles.

After what likely seemed like a much longer offseason than usual for Ole Miss’ players and coaches filled with questions about if they could keep their competitive edge in the rugged Southeastern Conference without Laquon Treadwell, Robert Nkemdiche and Laremy Tunsil and how in the world they would keep one NCAA investigation development after another from becoming a distraction, Ole Miss looked like a well-oiled, unfazed machine by jumping out to a 22-point lead on Florida State before its season was two quarters old.

As many haymakers as Ole Miss hit the Seminoles with early, Florida State returned the favor one after another from late in the second quarter on. If you didn’t know any better, you would’ve sworn the teams switched jerseys.

Florida State chipped away at first with two of Ricky Aguayo’s six field goals, but the first bust in what would soon be many by Ole Miss’ green secondary opened the floodgates. Deondre Francois, who looked more like a seasoned veteran than a guy taking his first collegiate snaps, found Travis Rudolph wide open for Florida State’s first touchdown with less than a minute left in the first half, the pro-FSU crowd woke up, and Ole Miss was never the same.

Ole Miss gave the Seminoles plenty of help. Florida State was given back-to-back short fields to work with during its comeback after one of Chad Kelly’s passes went off Evan Engram’s hands for an interception and Kelly fumbled while being sacked a couple minutes later.

The Rebels owned the line of scrimmage in the first two quarters yet got owned on both fronts in the last two. Ole Miss, which turned to freshman Greg Little at left tackle for Rod Taylor for most of the second half, allowed five sacks while Francois picked apart the Rebels’ young secondary with the defensive line gradually becoming less disruptive.

And a night that started with so much promise for an Ole Miss team that’s talked all summer about the chance to prove wrong anyone that may doubt them turned, as Hugh Freeze referred to the meltdown so appropriately afterward, nightmarish.

There’s still time for Ole Miss to figure it out. Freeze and his players kept things in perspective afterward, pointing out that it’s one game in a marathon of a season with their most important games starting later this month after Saturday’s dress rehearsal against Wofford.

But Monday’s game had some relevance, too, considering the goals with which a team ranked No. 11 nationally begins a season. Ole Miss players also spent the offseason talking about the desire to parlay that 10-win season last year into bigger and better things this fall — championships.

The Rebels had a chance to start building a playoff resume with a signature win and send a statement doing it. Instead, it’s a chance that fell to the wayside.