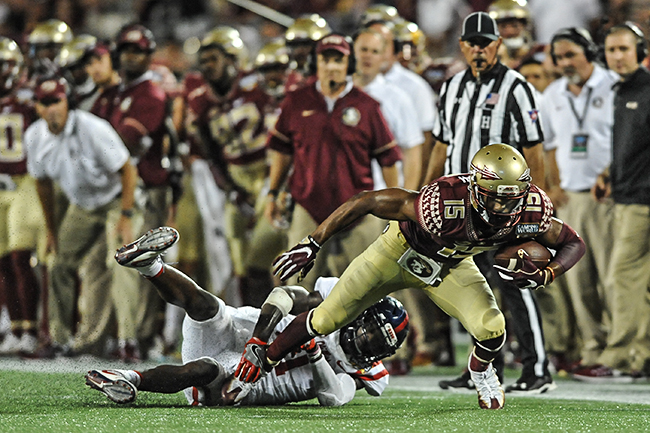 ORLANDO, Fla. — When the third quarter began, Ole Miss had 312 yards of total offense. By the time it ended, the Rebels had 305.

The negative 7 yards the Rebels netted was just one of the issues that led to the second-half collapse that really began late in the first half against No. 4 Florida State Monday night at Camping World Stadium.

A 28-6 lead had been built by Ole Miss after stellar and nearly flawless execution on both sides of the football had the majority of the pro-Florida State crowd in stunned silence. Chad Kelly had thrown four touchdowns, Dalvin Cook was shut down by the Ole Miss defense, and redshirt freshman quarterback Deondre Francois looked like, well, a true freshman facing a Power-Five team for the first time.

Then the Seminoles got their offense going late in the first half, using a nine-play, 75-yard drive capped by a 16-yard touchdown pass from Francois to Travis Rudolph to cut the lead to 28-13.

There was half a minute remaining on the clock, and Kelly took a knee — and the 15-point lead — into the locker room.

Then the second half began.

“That was a nightmarish second half,” Ole Miss coach Hugh Freeze said after the Rebels’ 45-34 loss.

There really is not any other way to describe it.

Florida State got the ball to start the third quarter and continued what would be a run of 33 unanswered points by Francois and the Seminoles’ offense. He went 17-for-25 for 201 yards and a touchdown in the second half.

The first seven drives of the second half ended in four field goals and three touchdowns for Florida State. An offense that looked all but lost in the first 15 minutes went into the locker room at halftime and came back out looking like a top-5 team they were billed as.

It was not all Florida State’s doing as the Rebels’ offense went into the locker room and never came back out. Kelly threw his second of three interceptions on the opening drive, a pass that went off the hands of tight end Evan Engram and into the arms of a waiting Seminole defender. He then tried to avoid a sack on the following possession, fumbling the ball deep in Ole Miss territory. Florida State scored 14 points off of the turnovers in less than three minutes of game clock, taking a 29-28 lead, its first of the game.