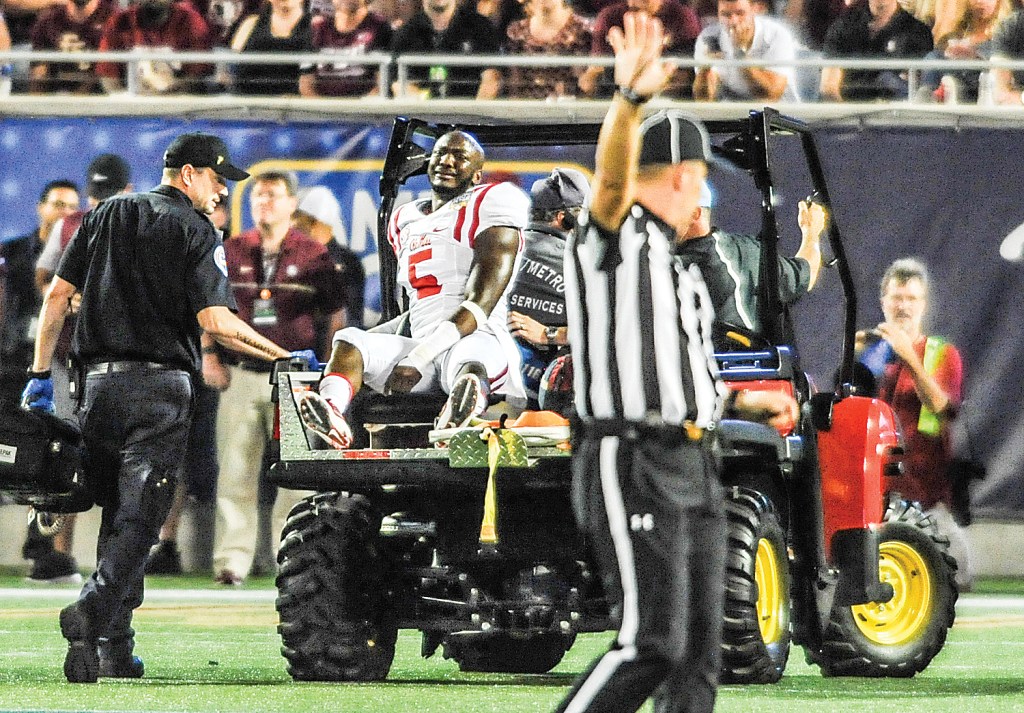 A young Ole Miss secondary is about to get younger.

Junior cornerback Ken Webster tore “every ligament in his knee” and will miss the remainder of the season, head coach Hugh Freeze said Wednesday. Webster landed awkwardly while defending a pass early in the Rebels’ 45-34 loss to Florida State on Monday and had to be carted off the field.

Running back Eric Swinney is lost for the year, too, after tearing his ACL on his only carry of the game. The redshirt freshman, who missed all of last season with a stress fracture in his leg, is the second back No. 19 Ole Miss has lost after Jordan Wilkins was ruled academically ineligible during fall camp, leaving Akeem Judd, Eugene Brazley and true freshman D’Vaughn Pennamon, who will no longer redshirt, as the primary options in the backfield.

“We’ve got Jarrion Street that could move back over there (to running back) or maybe Kailo Moore,” Freeze said. “But we’re so thin at corner, so probably Jarrion would be the next guy if we had to do that.”

Carlos Davis will step in for Webster opposite Tony Bridges, which Freeze said will likely cut Davis’ kick return duties back to just kickoffs with freshman receiver Van Jefferson able to return punts. A sophomore (Cam Ordway), a redshirt freshman (Jalen Julius) and a true freshman (Jaylon Jones) fill out the depth chart at a corner spot suddenly thin on bodies.

“We definitely are looking at any option, particularly at corner,” Freeze said on Wednesday’s Southeastern Conference coaches teleconference.

Before Wednesday’s practice, Freeze mentioned former cornerback turned receiver Derrick Jones as a candidate who could move back to defense, though no decision has been made on that yet.

More youth is the first option at the position in a secondary that already has sophomore Zedrick Woods and true freshman Myles Hartsfield starting at safety.

“Right now, we just keep trying to get the younger guys better,” defensive coordinator Dave Wommack said. “I think they will. Somebody is going to get more reps than they were getting. Cam Ordway has got to step up. Jaylon and Jalen got to step up.”

Words of advice
The Rebels’ inexperience on the back end of the defense was exposed against Florida State, which threw for 419 yards in the comeback win.

The Seminoles, behind quarterback Deondre Francois, peppered Ole Miss with underneath routes to take advantage of some soft coverage at times, something Freeze said was a result of his young defensive backs either not understanding the schemes or not being able to execute them.

Regardless of the reason, defensive tackle D.J. Jones said he’d like to see them be more aggressive in their approach.

‘Still feeling it’
Up next for Ole Miss is Wofford on Saturday in the Rebels’ home opener, but the sting of a loss where Ole Miss gave up a 22-point lead in the first half and allowed 33 unanswered points was still fresh for some players.

Chad Kelly had 313 yards passing and four passing touchdowns to help the Rebels build their early 28-6 lead, but the senior also accounted for four turnovers as Ole Miss was outscored 39-6 over the final 33 minutes, 4 seconds of game time.

“Realistically I’m still feeling it,” Kelly said. “You talk to people. Me and my dad had a whole conversation about it this morning. … There are little things that frustrate you because you could be sitting here 1-0 after all that hard work in the offseason, all that time in the film room and this and that. It hurts, but you’ve got to get by it, and now we’re just looking forward to the next game.”

Extra Points
Defensive end Fadol Brown was held out of Wednesday’s practice as a precaution with some soreness in his surgically repaired foot, Freeze said. … Tony Conner had his knee drained after Monday’s game but went through practice. … Offensive line coach Matt Luke said Rod Taylor and Greg Little graded out “really good” at left tackle while right tackle Sean Rawlings had the highest grade of the group.