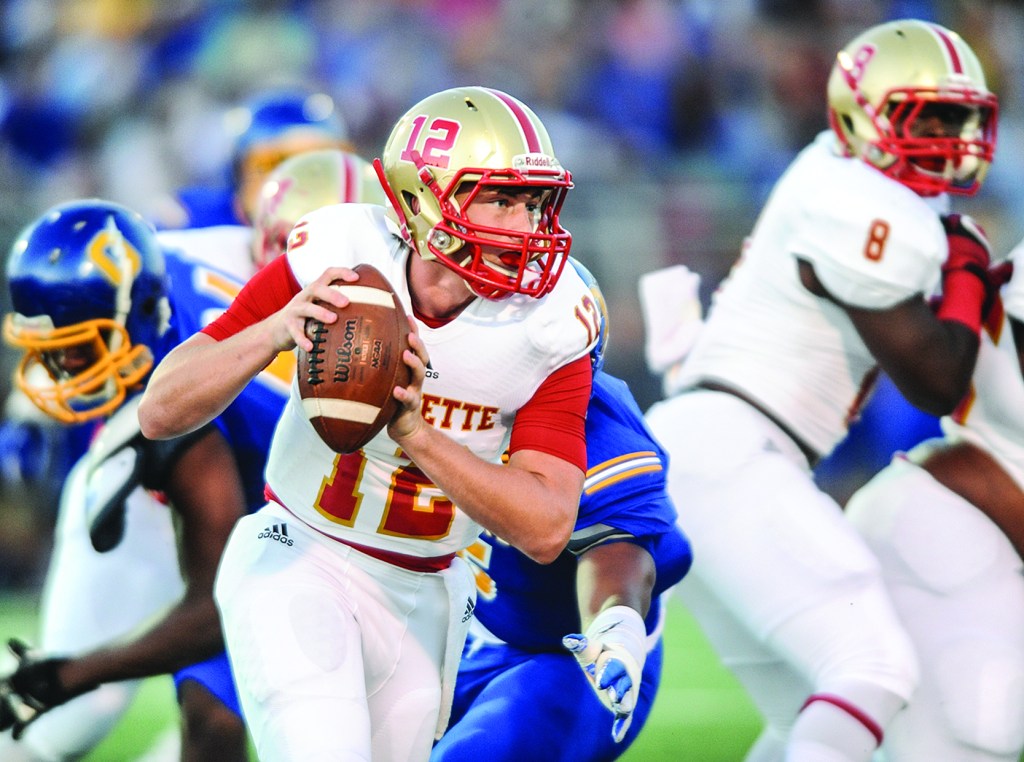 Lafayette quarterback Will Ard scrambles away from Oxford defenders during last year’s game at Lafayette’s William L. Buford Stadium. The Commodores will make the return trip to Oxford’s Bobby Holcomb Field on Friday as the teams renew their annual Crosstown Classic. (Bruce Newman)

It feels like preseason was yesterday, yet here we are at Week 4 of the high school football season in Mississippi and with it comes something near and dear to the Oxford-Lafayette community. The annual Crosstown Classic pitting rivals Oxford and Lafayette takes place on Friday (7 p.m., 95.5/105.1 FM).

The Chargers will do the honors of hosting this season as Lafayette will travel across University Avenue to Bobby Holcomb Field for the 2016 installment of the gridiron rivalry.

To be honest, the location has not really mattered much in game’s recent history. Oxford (2-1) is riding a four-game series winning streak, including last season’s 31-21 win at William L. Buford Stadium. The last time Lafayette (0-2) won was in 2011 with a 40-12 score.

“Obviously, a great rivalry any time these two teams get together,” Oxford coach Chris Cutcliffe said. “What we’ve talked about is you’ve got to manage that emotion and still have a good week of preparation. I think we’ve done that to be able to go out and have a great game Friday night.”

Oxford is coming into the game riding some momentum after a come-from-behind 21-17 win over Madison Central last week, claiming its second win over a Class 6A opponent in three weeks. Cutcliffe saw good things on both sides of the ball when looking over the film.

“There’s definitely a lot of positives,” Cutcliffe said. “(Defensive lineman) Nick Sisk had an outstanding game at nose (tackle) for us. We had a lot of kids play really well, particularly on the defensive line. Offensively, seeing DeDe Pegues step up as a young guy that got called into duty and make plays is really great to see.”

The Chargers would like to see the momentum continue before heading into their bye week and then a massive Region 2-5A opener at West Point in two weeks.

Close calls
It is a different story for Lafayette, losers of its first two games. The Commodores hung close with 5A power Grenada before falling 14-7 late last week. All 21 points were scored in the final 8 1/2 minutes. After two early returns in the Michael Fair era, it would be easy to assume the defense has come along faster than the offense.

“Our defense is really keeping us in games,” Fair said. “Offense, I feel like even though we only scored seven points the other day, we’re making strides. What we took away was we’re progressing offensively. Defense is flying to the ball, playing really well.”

The two losses could have easily been wins for the Commodores, who lost 26-17 to Horn Lake in their season opener when the Eagles scored late for the final margin and were unable to tie Grenada on a failed fourth down when running back Jamarcus Quarles could not get to the goal line.

“They’re a very talented team,” Cutcliffe said of Lafayette. “I think the record is misrepresentative of a team that does a lot of things very well. It’s definitely going to be a challenge for us.”

Quarterback Will Ard comes into the matchup having completed 18 of 35 passes for nearly 300 yards, two touchdowns and one interception. Quarles has continued to be Lafayette’s main threat, rushing for 304 yards on 51 carries. The four other rushers, including Ard and backup quarterback Ross Ingram, have combined for 77 yards total and one touchdown.

For Oxford, they proved last week they have a balanced attack. Running backs Lance Stewart and Hiram Wadlington combined for 98 yards and a touchdown on 27 carries against Madison Central. It allowed sophomore quarterback John Reece McClure to open up the passing game, gouging the Jags for 242 yards and two scores.