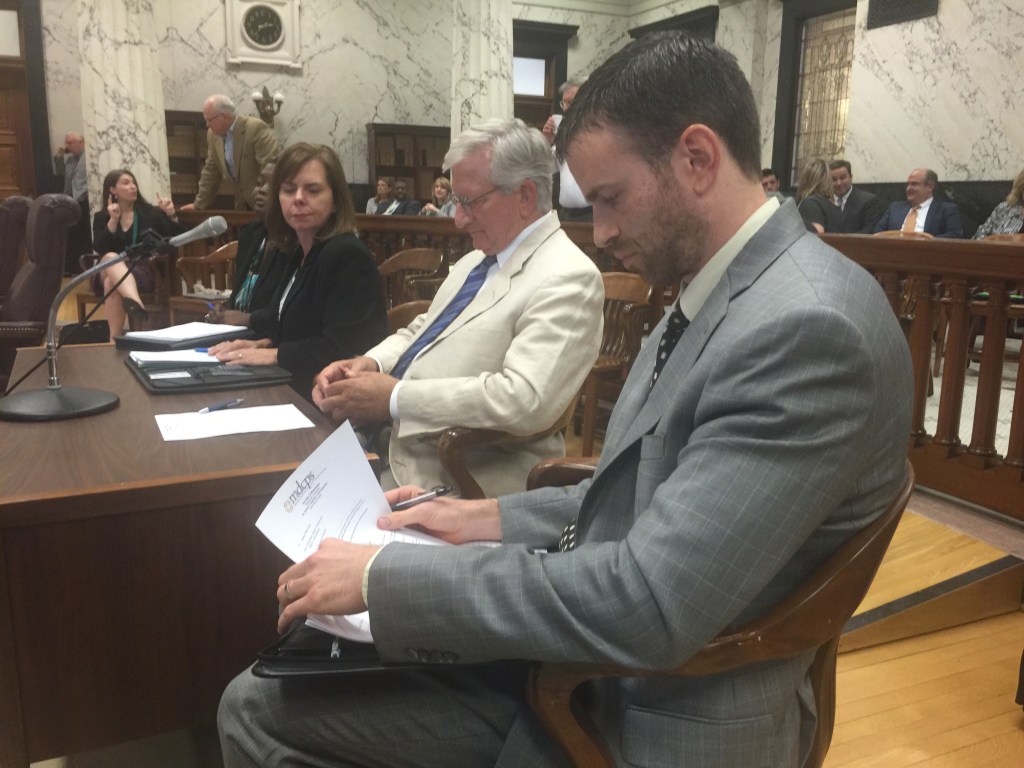 Kristi Plotner, from left, David Chandler and Seth Shannon of Child Protective Services prepare for their session with the Legislature on Wednesday.

With salaries for direct care workers starting at just under $16,000 a year, the Mississippi State Departments of Health and Mental Health struggle to keep these employees from leaving their agencies for higher-paying private sector jobs, agency administrators told legislators Wednesday at the Capitol in Jackson.

The Department of Mental Health, where approximately 2,900 of its 7,147 employees are direct care workers, has been hit the hardest. The turnover rate for the department is 49 percent, the highest of any state agency. Kelly Breland, director of the bureau of administration at the Department of Mental Health, asked the legislators to consider raising the salaries for these workers, calling them the “heart” of the mental health department.

“They’re like the older brother or sister to these individuals,” Breland said. Direct care workers are trained to recognize symptoms of aggression and to de-escalate an emotionally unstable patient, he said, but they also handle everyday tasks such as taking patients to appointments, helping them interact with others and even brushing their teeth.

“Anything that can be done with the patient, direct care workers are at the center of it, making sure things go well,” Breland said.

by the Legislature’s tax and budget working groups and designed to assess the state’s tax structure and 13 state agency budgets, focused on personnel issues. In addition to the Departments of Health and Mental Health, the legislators heard from the Department of Human Services and Child Protective Services. The working groups held their first round of meetings with state agency officials last month.

Direct care workers at the health and mental health agencies are among the lowest paid in state government, with salaries for trainees starting at $15,898. After finishing a 12-month course, trainees are promoted to direct care worker with a salary of $17,409.

This training, which qualifies them as certified nursing assistants, also makes it easier for them to get higher-paid jobs in the private sector. And they frequently do. More than 62 percent of direct care workers at Mississippi State Hospital leave within the first year of employment, according to Bo Chastain, the hospital’s director. That’s the highest turnover rate of any position in state government, Chastain said in an exclusive conversation with Mississippi Today on Tuesday.

“And with turnover that’s the thing, you tend to always be in training mode. And the just-trained people are training new employees,” Chastain said. “When you’ve got 62 percent turnover that means the majority of the people at work are learning the job.”

“It’s always been a challenge to fight the turnover in direct care staff,” he said. “I believe it’s gotten worse in the last few years as their salary becomes less and less competitive.”

In an effort to combat this, at Wednesday’s legislative budget sessions, the Department of Mental Health passed out sheets with the State Personnel Board’s annual salary realignment recommendations. These are based on public sector wages in neighboring states and private sector wages in Mississippi. Starting salaries for direct care workers in Tennessee are $19,440 and $20,788 in Arkansas.

Under the realignment recommendations, the salary for a direct care trainee in Mississippi would increase to $18,283 and the salary of a direct care worker would be $20,020, an increase of $2,384 and $2,614, respectively.

Training new employees is expensive, too. The Department of Mental Health estimates that turnover costs the department between $2,300 and $2,600 per employee.

Turnover also takes a toll on the quality of care the agency is able to provide its patients, according to Angela Dupree, director of nursing at Jaquith Nursing Home at Mississippi State Hospital.

“One of the biggest problems with turnover is that once (direct care workers) make a connection with the patient, they leave. So many of our residents have dementia and when that bond is broken, lots of times you can’t get those residents back, you may never get that resident back again,” Dupree said.

“These are people who forget their families. But our (direct care workers) are here every day,” she said. “They connect with them, it may be that they smell like their mother did 100 years ago, but it’s familiar.”

The low salaries also whittle down the quality of people willing to apply for the position, according to Chastain and Dupree. Because direct care workers deal with patients who are often emotionally volatile, it can be a stressful position that Chandler said requires “a mature temperament.”

“Based on the salary, we don’t get high-quality trainees because a high-quality person will generally be someone with a family and they can’t make it on this salary,” Dupree said.

In fact, Dupree said that 60 to 70 percent of the direct care workers and certified nursing assistants that she supervises, most of whom are full-time employees, work a second or even third job to make ends meet. This statistic was repeated during Wednesday’s budget sessions by Wendy Bailey, director of public information at the Department of Mental Health.

The Department of Health is facing similar issues with the nurses and nurse practitioners on staff, according to Mary Currier, the state health officer. In the absence of an increase in funds, she said, it might be prudent for the department to increase salaries so they could hire a smaller number of high-qualified employees.

Speaker of the House Philip Gunn seized on this idea during Wednesday’s sessions.

“I wonder, then, could one good person do the job of three average people?” Gunn asked.

“If we had a better range of salaries for the employees? That would definitely help. Again part of the issue is funding. … The problem is almost everyone who works for the health department is paid at a very low level, so you have to look at every category,” Currier said.

Talks between the legislative work groups and the Department of Human Services and Child Protective Services also hinged on making salaries competitive.

John Davis, executive director of the Department of Human Services, said that his department’s 13 percent attrition rate was due in part to low wages, compared with the private sector.

“You also have millennials coming in and they’re staying a year or two and then moving on,” Davis said. “That’s not putting them down. Our salaries, they’re not as high as you’d get in the private sector.”

Child Protective Services, which had asked the Legislature to direct more money to increasing salaries in the department, said the effort had paid off.

“We asked the Legislature to give us funds so we could pay salaries that were competitive, and that’s what we’re paying,” said David Chandler, commissioner of Child Protective Services. “Now you know it is a difficult kind of work, so some people are probably just not going to last, but I think the pay is fair.”

So far the department has filled 237 of the 285 new positions they had targeted for the end of the year, according to Kristi Plotner, deputy commissioner for Child Protective services.

“So we’re ahead of schedule,” Plotner said.