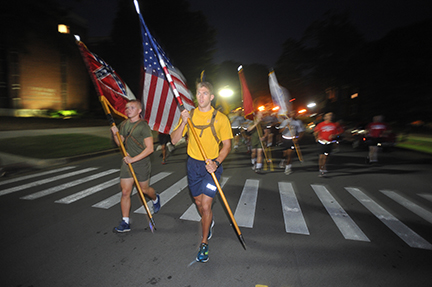 This year’s community tribute in memory of the terrorist attacks of Sept. 11, 2011 will honor the people in our community who put others first whether they are firemen or policemen, volunteers at nonprofit organizations or veterans who put their lives on the line for their country.

Heading up this year’s events is Volunteer Oxford, which is coordinating the program that will take place over several days. Director Kaitlin Wilkinson said the LOU Community 9/11 National Day of Service and Remembrance Program will be held over several days rather than just on Sunday, Sept. 11.

“This year, 9/11 falls on a Sunday so we had to plan the school programs on a weekday,” she said. “The Grove-and-Give veterans home supply drive is during the first home football game (on Saturday) and we wanted the main community program to continue to be held on 9/11 because we feel that it’s important to be on that date.”

The program will kick off at 6 a.m. Friday with the University of Mississippi ROTC 9/11 Memorial Run, a 2-mile run starting at the Lyceum on campus.

The run will be led by cadets following a cannon blast. Runners will head down University Avenue, around the Square and back to campus with a finish at the Grove stage.

“This commemorative run honors the victims, the first responders and our service members and their families who put our safety and well-being ahead of their own personal needs and continue to protect today,” Walton said.

Last year, about 200 cadets and midshipmen from the Army, Navy and Air Force and 500 noncadets participated in the event.

Registration is not required. Participants are asked to be at the Lyceum shortly before 6 a.m. ready to run.

Emergency preparedness presentations will be held at Lafayette County and Oxford schools on Friday as well.

On Saturday, donations will be collected for the Mississippi State Veterans Home in the Grove during Ole Miss’s first home football game. Donations can be dropped off at The Pavilion. Items being collected include diabetic socks, pajamas, white T-shirts, flannel shirts, non-slip slippers, wheelchair bags, magnetic picture frames, headphones and toiletries. For a complete list, visit www.volunteeroxford.org.

Children from around the community, in kindergarten through second grade, will be coloring pictures of firemen and police, while students in third through 12th grade will be writing letters of gratitude to military members on active duty.

The colored pictures will be displayed on Sunday during the main event to honor all local first responders.

North Mississippi VISTAS will be volunteering with Habitat for Humanity to help build a home in the Brittany Woods subdivision on Saturday.

The Remembrance Program will be held from 2 to 4:30 p.m. At the Oxford Activity Center where Mayor Pat Patterson and Lafayette County Board of Supervisor President Jeff Busby and University Police Chief Tim Potts will be speaking.

Representatives from several local nonprofit organizations will have booths set up with information available about each.

New this year will be a Touch-a-truck event, where children can hop on a fire truck or bulldozer and maybe even get to turn on the siren on a police car. Light refreshments will also be available throughout the event.

Wilkinson said it’s more important today than ever to teach the younger generations who weren’t born when the terrorist attacks happened, to make sure the country never forgets the acts of bravery shown that day by first responders and the thousands of men and women who helped fight the war on terrorism.

“It’s up to us, the ones who watched it all happen, to make sure they understand what’s going on,” she said. “It’s also the National Day of Service, where towns all around the country are doing something to better their communities and the LOU community is honored to be a part of that.”