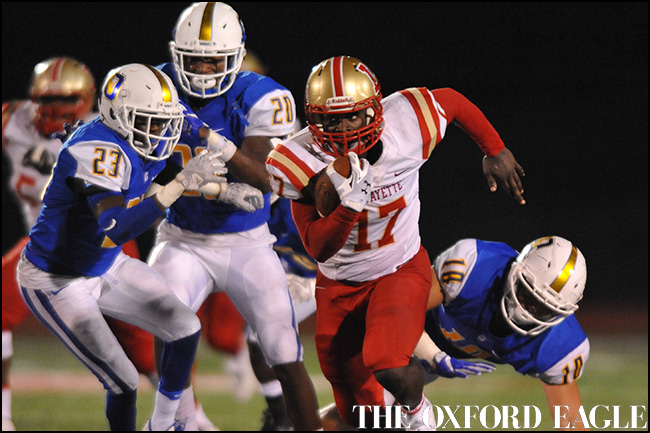 Running back Jamarcus Quarles (17) and the rest of the Commodores got in the win column last week against Oxford, but plenty of tests still await Lafayette starting Friday with Louisville. (Bruce Newman)

If Lafayette is going to be successful this season, it will have to have the ground game excel each week. Jamarcus Quarles is the workhorse of the Commodores’ rushing attack and proved that Friday night.

The junior running back gashed the Oxford defense for two touchdowns, leading Lafayette to its first Crosstown Classic victory in five years. Head coach Michael Fair has said numerous times that Quarles was the Commodores’ main threat in the backfield and finally saw the production he’d been looking for.

“(Quarles) is just so electric,” Fair said. “Any time he’s got the ball in his hands, he’s got a chance to take it and score.”

Quarles indeed provided the spark for the Lafayette offense, rushing for 269 yards on 33 carries. The first score was a 35-yard run in the second quarter to make it a 9-3 Lafayette lead. Quarles almost added a third touchdown to his night but was unable to find paydirt before time expired in the first half.

Late in the third quarter, he broke through the Oxford defense for a 72-yard run, nearly untouched, to put the Commodores up two scores. Another run of 59 yards in the fourth quarter set up the Commodores at the Oxford 5-yard line, where Lafayette scored a few plays later off a Will Ard touchdown pass for the winning margin.

“I didn’t really expect it. I just followed the holes that my teammates created,” Quarles said. “As I saw the gap, I just shot the gap and used my breakaway speed for a run or a touchdown.”

All night, Quarles was able to penetrate the Oxford defensive backfield thanks to the push his offensive linemen were able to get against the Chargers’ defensive front. It was a battle the Commodore linemen sensed they could win early on in the game.

“When we came into this game, the word was domination,” Lafayette offensive lineman Matt Toles said. “We just had to dominate every play, and I felt like we did that. … I felt we got (the push) just about every play.”

Part of the offensive line’s improved play over the first four weeks has been the result of Fair moving some pieces around, trying to find the right combination. He may have found it Friday.

Drew Tapp was moved from center to left tackle, Hunter Chance moved from tackle to right guard and tight end Luke Gossett took over at center for Tapp.