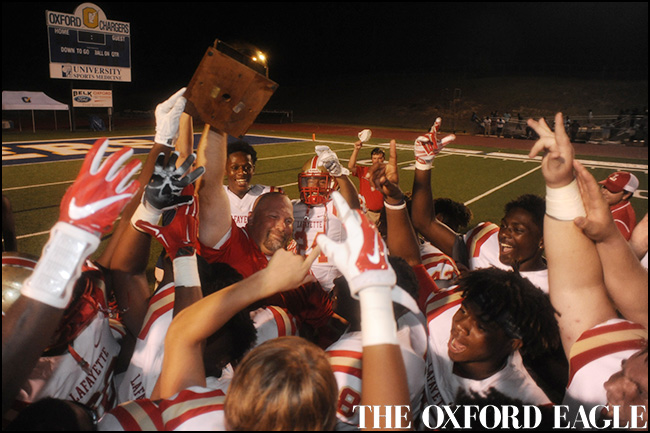 Dillon Woods couldn’t hold back, sliding his words through a grin that stretched from ear to ear.

It’s a feeling that’s been five years in the making.

Jamarcus Quarles ran for 269 yards and two touchdowns, and Lafayette got its first win in the Crosstown Classic since 2011 with a 23-3 victory over Oxford on Friday at Bobby Holcomb Field. Quarles had 118 yards in the first half and only got stronger from there, overcoming a pair of early fumbles to help the Commodores (1-2) pick up their first win under first-year coach Michael Fair after losing by a combined 16 points to Horn Lake and Grenada in their first two games.

“We’ve been close the last two weeks, and we feel like we’ve got a really good football team. We were ready to play this week.”

Quarles, Lafayette’s junior running back, carried 33 times, scoring on runs of 35 and 72 yards and ripping off a 59-yarder to set up Will Ard’s 5-yard touchdown pass to Brandon Turnage that gave Lafayette its 20-point lead with 9 minutes, 47 seconds remaining. Once the final second ticked away, Lafayette players took turns running around the field with the Crosstown Classic trophy before handing it off to Fair in a mob.

“Words cannot explain it,” Lafayette senior offensive lineman Matt Toles said. “We worked so hard for this. … The last couple of years, it was terrible. This year, hey, it feels amazing.”

Oxford’s offense never came close to finding a rhythm against Lafayette, which set the tone for its strong defensive effort when Amani Johnson dropped Oxford’s Hiram Wadlington in the end zone for a safety to get the Commodores on the board with 5:24 left in the second quarter. Wadlington had 127 yards on 25 carries, but Gray Jenkins’ 38-yard field goal midway through the first quarter was all the Chargers (2-2) mustered.

“We just didn’t execute very well on either side of the ball. That’s the bottom line,” Oxford first-year coach Chris Cutcliffe said. “I don’t think we had the same football team that went down to Madison Central last week show up tonight. Hats off to Lafayette. They played a great football game. They were hungry and had their backs against the wall a little bit, and they played like it. Our guys didn’t respond to it.”

Said Oxford linebacker DQ Thomas, “I can honestly say they probably outplayed us in this one. You win some, you lose some. We’re just going to come back, watch film and fix it. That’s the only thing you can do.”

Quarles’ first scoring run put Lafayette up for good late in the first half while his longest run of the game extended the Commodores’ lead to 16-3 with 4:43 left in the third quarter. Ard didn’t need to throw much, completing eight of his 11 attempts for 88 yards with the touchdown and an interception, but the senior played his part in a rivalry victory that’s eluded the Commodores for four years.

“People knowing we were 0-2, they downed us, but we brought it back,” Woods said. “We’ve been talking about it for a long time, and we just did it.”