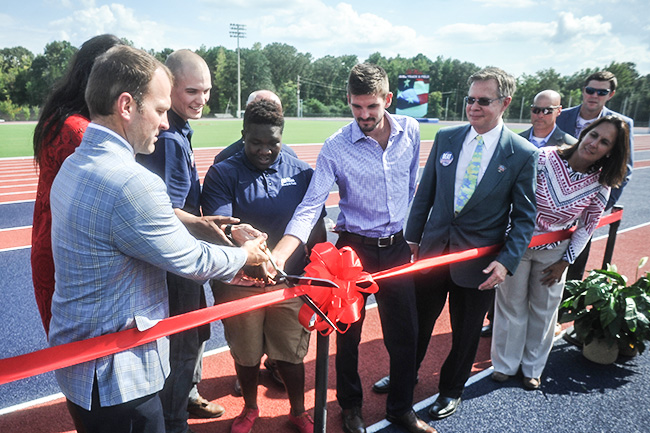 A project that was not on athletic director Ross Bjork’s to-do list initially is now complete. The newly renovated Ole Miss track & field complex had its ribbon-cutting ceremony on Friday with many current and former Rebel athletes in attendance.

“Now (the Ole Miss athletes) have a home,” Bjork said during the ceremony. “Now they have a home where they can compete and train at the highest level.”

Poor conditions all around the previous complex, including bad dirt, failed drainage pipes and sinkholes in the track’s surface, caused Bjork and his staff to all but condemn the facility and start from scratch a project to rebuild.

Ground around the track, which was originally built in 2002, started developing holes in 2013. After a sonar survey revealed large cavities underground, a new drainage pipe was needed. The project itself cost $7.2 million and took nearly two years to complete. Xcavators Inc. were the developers on the project.

Some of the improvements include a top-of-the-line Beynon Sports Surface 2000 full pour polyurethane running surface with hobart texture, a 37-by-26-foot Daktronics video display board and a brand new throwing area adjacent to the track.

Ole Miss’ track athletes were allowed to see and practice in their new complex for the first time Wednesday.

“For the kids, it was like Christmas,” Ole Miss coach Connie Price-Smith said. “The day before we were allowed to practice, I pulled up at 7:30 in the morning and they were (on the track). I was like, ‘Get off of the track!’ They couldn’t wait for that gate to be open and to say they could go practice.”

“I’m looking so forward to coming out here and hopefully setting some records on the new track as some of my teammates will. I’m sure of it,” Saunders said. “We’ve come so far, and with this new track comes the new normal. That is to bring championships, titles, records and everything else to Ole Miss.”

With the new complex comes the opportunity for Smith to recruit some of the country’s best talent to Oxford. The Rebel track program is one of the top in the country, but now having the ability to show potential recruits what they will be running, jumping and throwing on will help Smith with her pitch.

“This is going to make a major difference,” Smith said. “There’s already so much tradition from Ole Miss and the history of the track & field program. So it’s not really hard to sell it, but when you put something like this on top of it, it just makes it even more of a sweeter pot.”

The outdoor season for track & field will begin in the spring.