Ole Miss freshmen are the largest, most academically qualified class in school history 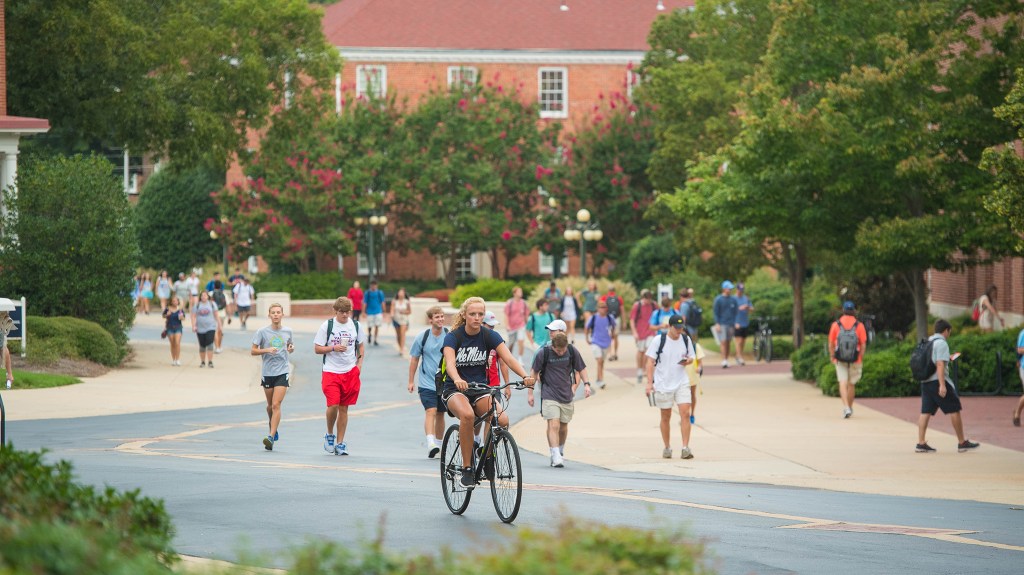 Students head to class at the University of Mississippi, which has experienced record enrollment again this year. Photo by Kevin Bain/Ole Miss Communications

The University of Mississippi has recorded its 22nd consecutive year of rising enrollment, registering its largest and most academically qualified freshman class ever.

Enrollment at the state’s flagship university hit 24,250 across all campuses, largest in the state, according to preliminary data. The freshman class of 3,982 students posted an average ACT score of 25.2, surpassing the UM record of 24.7, set last year.

“Students and families across the state and nation are noticing that great things are happening here at the University of Mississippi,” Chancellor Jeffrey Vitter said. “They recognize the academic excellence and outstanding college experience we offer and continue to join us in record numbers.

“Our faculty and staff work very hard to deliver the very best academic programs at a competitive price, providing all qualified Mississippi students the educational opportunities to transform their lives and our communities. It’s gratifying to see those efforts acknowledged by a growing Ole Miss family.”

Total enrollment is up 412 students, or 1.7 percent, from last fall.

“Our university has a long history of attracting and developing student leaders,” Vitter said. “We offer them valuable experiences and help them hone their talents.

“I look forward to seeing what this talented group of freshmen can accomplish. I fully expect them to have a tremendous impact on our local and global communities during their time here and beyond.”

The group bucked declines in average ACT scores both nationally and on the state level. Among new freshmen from Mississippi, this year’s average was 24.8, up from last fall’s 24.4.

The progress in freshman ACT scores actually has been maintained over the past nine years, growing 2.5 points over that span. Several factors have contributed to that success, Provost Morris Stocks said.

“We offer more and more outstanding programs for excellent students,” Stocks said. “For example, the Mississippi Excellence in Teaching Program is now admitting 30 students per year. These are honors-quality students planning to be teachers, and they have committed to teach in Mississippi upon graduation.

“Then there’s the Center for Manufacturing Excellence, which brings in 60 top-level freshmen each year who are interested in the intersection of engineering, business and accounting. And over at the School of Accountancy, we’re admitting more students with ACT scores over 30 than we’ve ever had, and a lot of that stems from the school being ranked in the Top 10 for several years in a row now.”

“We’re now competing against the best universities in the country for the best students in the country,” Stocks said. “At the same time, we remain committed to educating the people of Mississippi and giving all qualified Mississippi students a chance to succeed and make better lives for themselves and their families.”

The university’s efforts to help new students adjust to college life and be successful – including FASTrack and the Freshman Year Experience program – also continue to pay dividends. Student retention remained near record levels, with 85.3 percent of last year’s freshmen returning to campus to continue their studies this fall.

The majority, 59.4 percent, of Ole Miss students are from Mississippi, including students from all the state’s 82 counties. The university also attracts students from around the nation and world. Overall, the student body includes representatives from every state, the District of Columbia and 90 foreign countries.

With a newly expanded building, the Sally McDonnell Barksdale Honors College continues to grow, enrolling 1,420 students this fall, more than doubling over the past 10 years. It received 1,484 applications for this fall, up 15 percent from last year’s 1,293 submissions. The Honors College has a record 474 incoming freshmen, with 59 percent being Mississippi residents.

Once it settles into its new space and completes renovations on the existing facility, the Honors College has a target enrollment around 1,500 students. The new space allows faculty to broaden the challenges and opportunities for its students, Dean Douglass Sullivan-Gonzalez said.

“It gives us the physical capacity to go deep into conversation in public space,” Sullivan-Gonzalez said. “At a time when civil discourse is so lacking in America, we want to create a space where we can model civil debate on ideas, even ones that appear threatening.”

While many of the university’s schools and programs experienced growth, its accounting and journalism schools enjoyed the largest increases.

Enrollment in the Patterson School of Accountancy grew 9 percent, to 1,380 students this fall, compared to 1,261 last year. The school has been a mainstay in the Top 10 rankings for several years, and all three of its programs are again in the top eight this fall.

In the Meek School of Journalism and New Media, undergraduate enrollment increased 8 percent, growing from 1,375 students in fall 2015 to 1,486 this year. Founded in 2009, the school has benefited from being on a beautiful campus, with economical tuition, excellence in athletics and an exceptionally effective Office of Admissions, Dean Will Norton said.

“We have a program that focuses on preparing graduates for media careers in the modern world, not for 20 years ago, and we have a faculty who held significant positions in the media, many just within the last few years,” Norton said. “Because of this, many of them also are well-versed in social media, and they can help students master those areas.”

The school offers opportunities for students that are rare among journalism programs, he said.

“Not many places offer students a chance to do documentaries or depth reporting courses, or campaigns for companies throughout the region, but we offer all that here,” Norton said. “Our international projects also have been exceptional.”

“We are near or at capacity in all of our programs, with the exception of some of our online offerings,” said Dr. Ralph Didlake, UMMC associate vice chancellor for academic affairs.

Areas enjoying growth include the School of Medicine, from 563 students to 577; the Medical Center’s residency and fellowship programs, from 626 to 640; and the School of Dentistry, from 143 to 148.

The increase should accelerate with a new 151,000-square-foot, $74 million School of Medicine building set to open in fall 2017, Didlake said. The new building “is not only going to allow the School of Medicine enrollment to increase, but it will decrease pressure on other teaching space, allowing our other programs to grow.”

Enrollment should rise dramatically in the future, including the addition of a new School of Population Health, the seventh school on the medical campus. It opens to students in fall 2017.

To help accommodate the growing student population in Oxford, the university has opened two new five-story residence halls on the former site of Guess Hall, adding housing space for 603 students.

The university has launched a three-year project to expand and modernize the Student Union and is working on a new recreation center and transportation hub, a $32 million project on the south end of campus. Work also has begun on a $20 million renovation to Garland, Hedleston and Mayes halls, providing space for the School of Applied Sciences.

The university’s new STEM building, which will add 200,000 square feet of education and research space in the Science District for an estimated $135 million, will boost the university’s capacity to address workforce needs and enhance UM’s status as a Carnegie R-1 Highest Research Activity institution.

For more information on enrollment and programs at UM, go to http://www.olemiss.edu.

Ruth Cummins of the UM Medical Center contributed to this report.