The official attendance from the Battle at Bristol has been announced: 156,990 attended the Tennessee vs. Virginia Tech 2016 game, according to officials.

It is the largest crowd to ever see a college football game.

The speedway that calls itself the “last great Colosseum” was temporarily transformed into the world’s largest football stadium.

Tennessee and Virginia Tech are playing Saturday night at the Bristol Motor Speedway, located approximately halfway between the two campuses. The showdown dubbed the “Battle at Bristol” is expected to draw over 150,000 fans, which would shatter the current NCAA single-game record of 115,109 at Michigan Stadium when the Wolverines beat Notre Dame in 2013. 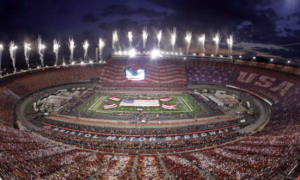 The Battle at Bristol smashed the all-time attendance record for a college football game. The official number is 156,990 fans.

A Tennessee-Virginia Tech matchup at Bristol had been discussed for about 20 years and finally was announced in 2013. Jerry Caldwell , the speedway’s general manager, said the facility’s unique characteristics made it ideal for this transformation.

Caldwell declined to disclose the costs of temporarily converting the speedway into a football stadium. Tennessee and Virginia Tech are both guaranteed $4 million because each school sold over 40,000 tickets. According to the game contract, each school also may receive an additional $300,000 because the grandstand seats sold out.

This will be the speedway’s first football game since the Washington Redskins and Philadelphia Eagles played a 1961 exhibition game here that drew 10,000 fans to a facility that seated 20,000. Saturday night’s event will have an entirely different atmosphere and feel.

“I’m curious to see how the field will be and how far the stands and everything will be from the field,” Virginia Tech receiver Isaiah Ford said.

The speedway is hosting the football game less than three weeks after a Sprint Cup race.

The morning after the race, 450 truckloads of rock and manufactured sand evened out the speedway’s bowl-shaped infield, which had a natural drop of about 3 feet from the edge to the middle. More than 100,000 square feet of AstroTurf were brought in to form the actual field, a process that was completed in about a week. Over 5,000 seats also were added.

“It’s something that will live with these individuals for the rest of their lives,” Tennessee coach Butch Jones said.

What are the words to Rocky Top? Tennessee’s fight…