Nothing fancy needed from Ole Miss in win 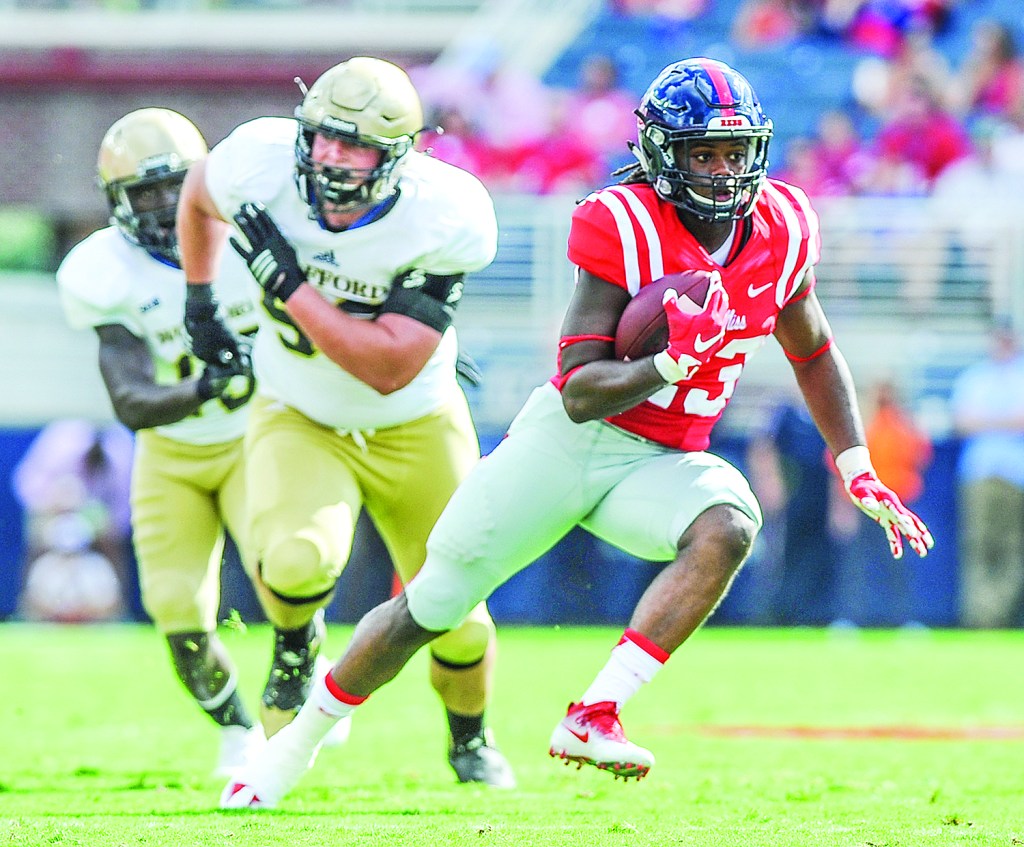 There wasn’t anything complicated about Ole Miss’ game plan Saturday.

Get in, get the big lead and get out with a win.

If you weren’t sure just how quickly Ole Miss wanted to put its 38-13 win over Wofford away and start sending in its wave of backups, Chad Kelly threw the ball 19 times in the first quarter. Keeping things simple against an overmatched Wofford defense, the Rebels scored on each of their first five possessions but essentially had the game in hand when DK Metcalf skied over a much shorter cornerback to haul in a touchdown pass that put Ole Miss up three scores in the second quarter.

It took Ole Miss’ defense a few series to get used to Wofford’s triple-option offense and all the formations, motions and intricacies that came with it, but all the Terriers scraped out on the scoreboard against Ole Miss’ real defense was a field goal with 4:38 left in the second quarter. Just in case the Terriers thought they were creating any momentum, Carlos Davis returned the ensuing kickoff into Wofford territory and Ole Miss was in the end zone on Kelly’s third and final touchdown pass to Quincy Adeboyejo six plays later to take control for good.

Ole Miss didn’t do what it really could’ve done to Wofford because it didn’t need to. The Rebels simply needed to move on.

The biggest news of the day once again came on the injury front with true freshman receiver DK Metcalf likely lost for the season after breaking his foot on that touchdown catch. Metcalf was quickly emerging as a favorite red-zone target of Kelly’s with his 6-foot-4 frame, but unlike at running back and cornerback, the Rebels have the kind of depth on the outside that can at least ease that blow.

The Rebels’ young defensive backfield wasn’t tested by Wofford’s triple-option offense — the Terriers only threw nine passes all day — so Saturday wasn’t a day to gauge what if any progress that group has made since being carved up by Florida State. Kelly was sharp from the start, bouncing back from a four-turnover gaffe against Florida State to play error-free football against the Terriers, while Akeem Judd and those young, inexperienced running backs who are now going from depth guys to significant contributors — Eugene Brazley, true freshman D’Vaughn Pennamon and possibly D.K Buford — combined for 134 yards Saturday.

That came out to an average of 5.8 yards per carry, but again, it was Wofford. After averaging less than 3 per rush against Florida State, there’s no way to know how prepared the new-look backfield is for what’s coming.

You can bet Alabama and Georgia are well aware of the Rebels’ shortage at running back and will get after Kelly the next two weeks with some of the most talented defensive fronts in the country, and the Rebels’ new-look group will need to do its part in taking some of the load off Kelly’s shoulders these next two weekends starting with the top-ranked Crimson Tide on Saturday.

Now the Rebels have a full week to prepare after playing yesterday’s game just five days after that tussle with Florida State, and the Rebels will start getting some of their questions answered next weekend at Vaught-Hemingway Stadium.

Ole Miss’ game Saturday was simply about having more points on the board than Wofford no matter how it looked while keeping its remaining health intact. It may not have gone exactly as planned, but now the Rebels can move on to the games that matter.