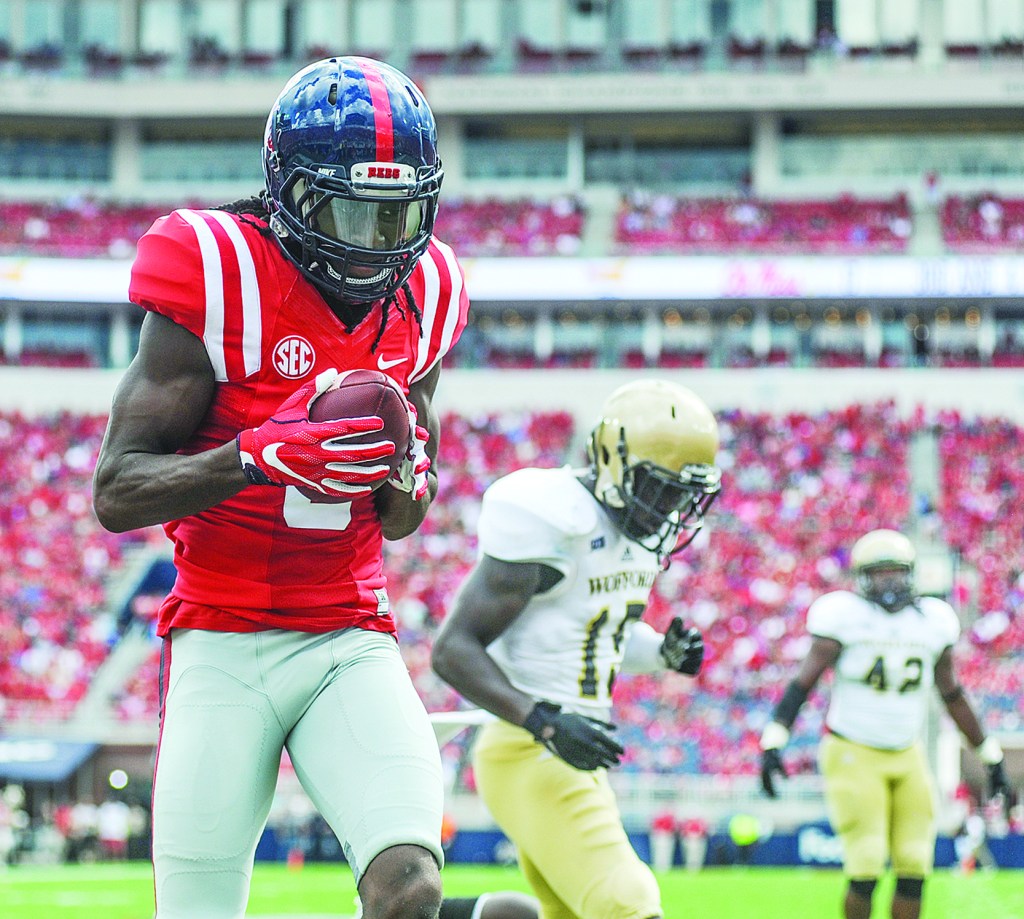 The only thing that was going to slow Ole Miss down on Saturday was Mother Nature.

The No. 19 Rebels took care of business when storm clouds threatened overhead, defeating Wofford 38-13 in their home opener inside the newly renovated Vaught-Hemingway Stadium.

After the loss to Florida State just five days prior, Ole Miss (1-1) did not look to have any lingering effects from their trip to Orlando. Now the Rebels can focus on next week’s much-anticipated home game against No. 1 Alabama.

Chad Kelly tossed three touchdowns while sophomore quarterback Jason Pellerin saw his first action in a Rebel uniform, adding a touchdown on the ground and in the air.

“Glad to get a win here in our new and improved Vaught-Hemingway,” Ole Miss coach Hugh Freeze said. “Excited to get home and get a win on a short week where preparation was very difficult, particularly (Wofford’s) offense.”

Committing four turnovers against Florida State on Monday, having a clean game was a prime objective for Ole Miss as quarterback Chad Kelly protected the football against the Terriers’ (1-1) defense. Pellerin did toss his first interception late in the fourth quarter.

The offense stayed on schedule, scoring on its first five drives of the game. Gary Wunderlich hit a 40-yard field goal, capping the Rebels’ opening drive. From there, it was four consecutive touchdowns, giving Ole Miss a 31-3 lead midway through the third quarter. Markell Pack, DK Metcalf and Quincy Adeboyejo were recipients of Kelly’s touchdown tosses. Metcalf’s potentially proved costly as the Oxford native broke his foot during the play and missed the remainder of the game.

“We’ve just go to keep the ball rolling, keep playing good,” Kelly said. “It comes down to execution. … That’s the best way to play football (turnover free). (Offensive coordinator) coach (Dan) Werner was harping all this week on protecting the football, and that’s what we did.”

Kelly finished the night completing 20 of 27 passes for 219 yards and his three touchdowns. Pellerin added 23 yards through the air, including his 12-yard touchdown pass to freshman wideout A.J. Brown, who recorded his first career touchdown catch.

Pellerin also showed flashes as a red-zone threat with his feet, rushing for 27 yards on six carries. He found the end zone on a 3-yard run in the third quarter.

The ground game did not find much footing after losing Eric Sweeney to injury against Florida State, running 34 times for 174 yards. Akeem Judd did most of the work, rushing for 64 yards on 11 carries. Eugene Brazley, the presumed No. 2 running back on the depth chart, ran for 39 yards on four attempts. Lafayette’s D.K. Buford got three touches for 18 yards.

Wofford’s points came from a field goal late in the second quarter, a touchdown off of quarterback Brad Butler’s 17-yard run and another field goal with less than two minutes left in the game.