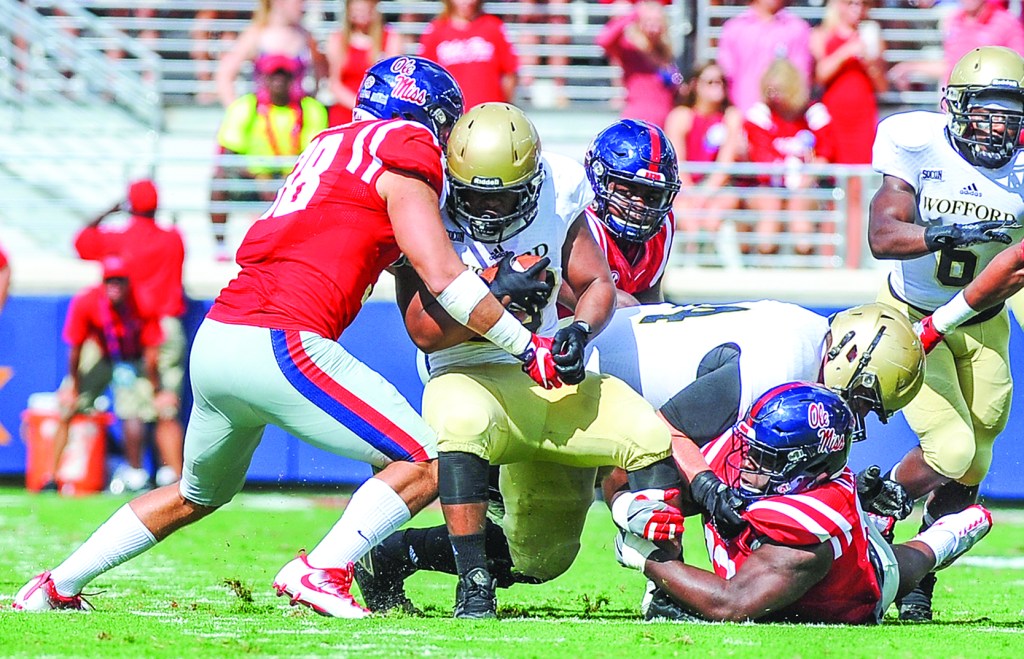 It was a short week and a completely different offense than what the Ole Miss defense will see the remainder of their regular season. It was all the ingredients for there to be struggles against Wofford’s triple option, but instead the Rebels passed the test with positive results.

The Rebels held Wofford to one touchdown and two field goals in their home opener, keeping quarterback Brad Butler and the Terrier running backs in check.

“It’s tough because I went into the game with two coverages and played one of them the whole game except three snaps,” Ole Miss defensive coordinator Dave Wommack said. “When you got a limited amount of time, it makes it difficult.”

Playing on Monday, traveling back that night and losing most of Tuesday, Ole Miss essentially had three days of practice to learn how to defend the triple option. Wommack and defensive line coach Chris Kiffin tried to make it as easy as possible for their players.

“I feel like we did a great job with the time we had,” defensive lineman D.J. Jones said. “Coach Wommack and coach Kiffin did a great job of getting us prepared. … We just had two or three defenses up front, not many coverages.”

Wofford did still get its yards on the ground, rushing for 233 yards, but it took 57 carries to reach that number. Butler ran for 63 yards on 12 attempts and had the Terriers’ lone score, a 17-yard run in the third quarter. Fullback Lorenzo Long had 52 yards on 17 carries.

Third downs were an issue for Ole Miss as they could not get off the field in the middle stages of the game as they were able to in the early and later stages. Wofford converted 6 of 16 third-down plays and went 2-for-3 on fourth down.

“It’s a challenging team,” Jones said. “With an offense like that, you don’t need too many guys. You get out in space, they can be a dangerous team.”

Sacks were hard to come by against a team where the quarterback constantly moves, but the Ole Miss defense did manage six tackles for a loss totaling 12 yards.

While the defense succeeded against Wofford, it is hard to really tell in a game such as Saturday’s if they corrected the mistakes made during Florida State’s comeback victory five days earlier.

The real test will come next weekend when No. 1 Alabama and what head coach Hugh Freeze called a “fast” defensive front visits Oxford.

“I couldn’t say because it’s a different offense,” Jones said when asked if corrections were made. “If it was a team like Florida State, I could give you a better answer.”