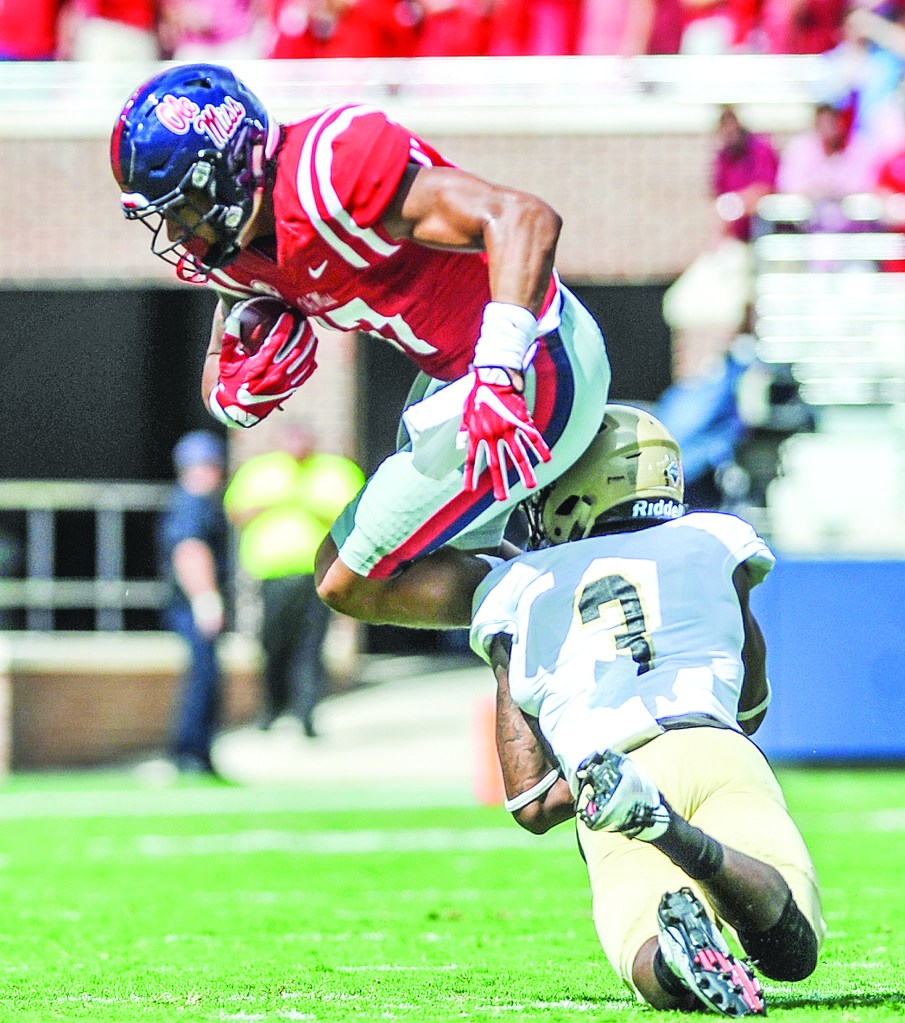 Chad Kelly’s day is over, but still no Shea Patterson. Jason Pellerin starts this drive

Short field positions proves fruitful for Wofford. The Terriers get their first touchdown of the game off a Brad Butler 17-yard run. No. 19 Ole Miss 31, Wofford 10 10:27 remaining

Rebels get pinned at their 2 and unable to move the ball past the 1o and punt for second straight drive. Chad Kelly remained in the game. Beginning to think Shea Patterson and redshirt may be in the same sentence this season, after all.

Ole Miss punts for the first time all game, ending a streak of scores on every possession. Wofford starts at their 30.

Wofford punts on their next drive and Ole Miss will get it back at their 16. It appears it is still Chad Kelly’s game. No Shea Patterson sighting as of yet.

Rebels work some clock off by trying to establish a little running game. Kelly hits Evan Engram for 33 yards to set up Ole Miss inside the Wofford 5. Jason Pellerin enters the game and runs it in from 3 yards out. #19 Ole Miss 31, Wofford 3 5:07 3Q.

Second half is underway and Wofford will start with the ball. In bigger news, D.K. Metcalf is out of his pads, on cructhes and has a walking boot on his left foot. Injury is unknown.

Stretching and warm ups have begun on the field, should be about 6 minutes away from football resuming

We have officially entered a weather delay here at Vaught-Hemingway Stadium. Second half should resume at 5 p.m. CT, per press box announcement

Carlo Davis returned the kickoff 62 yards to the Wofford 38. Ole Miss cashes in on the good field position for a 6-yard touchdown pass from Kelly to Quincy Adeboyejo. No. 19 Ole Miss 24, Wofford 3 1:36 2Q

Per Ole Miss, D.K. Metcalf is now out of the game due to a left foot injury. Would assume it occurred on the touchdown play

After a timeout Ole Miss gets a much-needed third down stop. Wofford connects on a 29-yard field goal. Drive took almost 10 minutes off the clock. No. 19 Ole Miss 17, Wofford 3 4:38 2Q

The Terriers are 3-for-3 on third downs this drive. The triple-option is giving Ole Miss fits, currently. Wofford threatening inside the Rebels’ 10.

Wofford has reached the Rebel 35, the deepest they’ve gotten into Ole Miss territory all game. Quarterback Brad Butler with a couple good reads this drive and the Rebel defense biting on the fakes a little too much.

To start the second quarter, Jason Pellerin entered at quarterback and ran for 9 yards for his first play as a Rebel. Ole Miss finds the end zone three plays later with a 10-yard TD pass from Kelly to D.K. Metcalf. #No. 19 Ole Miss 17, Wofford 0 13:50 2Q.

The running game, minus Jordan Wilkins and Eric Swinney, has not had a great start to the game. 8 attempts for 26 yards. Akeem Judd with 17 yards on five carries.

Wofford recorded two first downs on their second drive, getting near Rebel territory and drained over 5 minutes of game clock but have nothing to show for it. A personal foul penalty after a play backed the Terriers up to their 36 and were forced to punt it away for the second consecutive drive. Ole Miss 10, Wofford 0 1:51 1Q

A not-so-sharp offense at the onset of the game, which could be attributed to a quick five-day turnaround. Kelly hit D.K. Metcalf for a 27-yard touchdown pass, but a holding call on Rod Taylor negates it

Wofford goes 3-and-out on their first possession. Rebels seemed ready for the triple-option on that drive. Terriers punt goes to the Rebels’ 19. Ole Miss 3, Wofford 0 11:02 1Q

Ole Miss opens up with five straight passes on their opening drive but it stalls at their 23. Gary Wunderlich makes a 40-yard field goal. No. 19 Ole Miss 3, Wofford 0 13:05 1Q

Rebels receive the ball to start the game, taking it on their 35 after Wofford kicks it out of bounds.

Mississippi quarterback Chad Kelly made it a point during preseason camp to mention that the team’s young receivers were poised to make a big impact this season.

He wasted no time getting them involved in the offense.

Kelly said he was impressed by the poise the freshmen showed against Florida State.

“First live action, hopefully they got in a little groove and got a good feeling about the game,” Kelly said. “They understand the plays and the speed of the game already. If they keep working, they’re going to be all right.”

Jefferson, Metcalf and Brown bring depth to an already loaded group of Ole Miss receivers. Veterans Damore’ea Stringfellow and Quincy Adeboyejo are listed as the starters, while senior tight end Evan Engram caught a career-high nine passes for 121 yards and a touchdown against Florida State.

Kelly threw for 313 yards and four touchdowns against the Seminoles, but the senior also threw three interceptions and lost a fumble. If he can cut down on the errors, the Rebels appear poised to have plenty of success in the passing game.

“I definitely could have made some better decisions (against Florida State),” Kelly said.

Here are a few things to watch when Ole Miss hosts Wofford:

THE RENOVATED VAUGHT: Ole Miss will be playing its first game in renovated Vaught-Hemingway Stadium. Among the major changes: The north end zone was bowled in and the seating capacity has been increased to 64,038. There’s also a new natural grass playing surface, three LED video displays, new lights and a new sound system.

PATTERSON’S DEBUT? If Ole Miss jumps out to a big lead against Wofford, expect freshman quarterback Shea Patterson to receive his first career action. The 6-foot-2, 200-pound Patterson was widely viewed as one of the nation’s top quarterback recruits in 2015 and is the favorite to earn the job once Kelly — a senior — finishes his eligibility.

YOUNG CORNERS MUST STEP UP: Ole Miss lost arguably its best cornerback — junior Kendarius Webster — to a season-ending knee injury against Florida State. Seniors Carlos Davis and Tony Bridges are still around, but after that the Rebels will be very young. Redshirt freshman Jalen Julius and true freshman Jaylon Jones are probably the next two options.

FACING THE FCS: Ole Miss has won 11 of 12 games against teams from the Football Championship Subdivision since 2005, with the lone loss against Jacksonville State under former coach Houston Nutt in 2010. Freeze has a 4-0 mark against FCS teams. Wofford has a 1-18 record against teams in the FBS, with the lone win coming against Louisiana-Monroe in 2000.

RUN WOFFORD RUN: Wofford runs the triple-option offense, which is heavy on running plays. The Terriers ran for 346 yards and threw for 42 yards in their 21-7 season-opening win over Tennessee Tech. Wofford had a 5-6 record last season, but was still fourth in the FCS with 300 yards rushing per game.