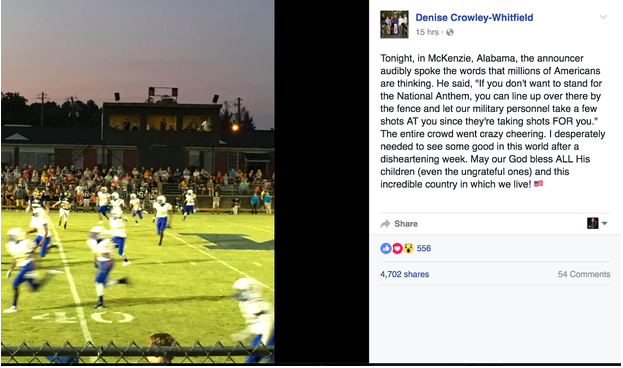 Something strange happened over in neighboring Alabama this weekend. Football, patriotism, guns, and religion got together at a high school football game and erupted in emotional disaster.

It started innocently enough as these things happen, during the pregame activities before a McKenzie High School football game in Alabama’s Butler County. Announcing at the stadium was Pastor Allen Joyner of Sweet Home Baptist Church in McKenzie, who apparently had pro quarterback Colin Kaepernick on his mind – the player who refused to stand for the national anthem before a game.

“If you don’t want to stand for the National Anthem,” Joyner said into the public address microphone, according to Facebook poster Denise Crowley-Whitfield, “you can line up over there by the fence and let our military personnel take a few shots AT you since they’re taking shots FOR you.”

The crowd at the high school game erupted in cheers, Crowley-Whitfield reported on Facebook, and she and others were thrilled to hear Pastor Joyner’s inspiring message.

“I desperately needed to see some good in this world after a disheartening week,” she posted on Facebook. “May our God bless ALL His children (even the ungrateful ones) and his incredible country in which we live!”

Crowley-Whitfield later deleted her post but not before it was shared thousands of times and received dozens of positive comments. Joyner’s family members even joined the social media sharing Saturday, with a daughter speaking up on Facebook that she is proud of her father that is is “not afraid to stand up for what he believes in.”

By the time Nick Saban and his Crimson Tide kicked off in Tuscaloosa against Western Kentucky Saturday afternoon, the biggest story in Alabama wasn’t America’s No. 1 ranked football team. It was the emotional shards shooting from one end of the state to another between those who think Pastor Joyner was right on target with his simply shoot them if they can’t be American comment on the public address system and those who believed his comments were deplorable.

AL.com had reported the emerging story late Saturday morning and word of the sensitive controversy spread faster than sin at a brothel, with a sharp dividing line down the middle of how people felt about it.

Pastor Joyner’s church came to his side, saying they “stand by” their pastor and “are proud of him.” Everything, they said, was taken out of context. It was just jest.

But by late Saturday afternoon many of the Facebook posts including the original one made by Crowley-Whitfield were deleted. The instigators of the message were hiding under cover, wanting it to all go away, while the rest of the world was left with a painful social media mess to argue over.

The problem with America isn’t whether people stand for the National Anthem or not, of course. It’s that the hard lines drawn in this Alabama controversy are becoming a consistent theme of the divided lines in our country, and social media is often the fuel to this raging fire.

In other words, the polite conversations in public take a darker, it’s them against us tone on social media, and gray is being erased from the color scheme. Everything is all black and white, with a lot of hatred caked on top.

So when the public address announcer in Alabama suggested that those who don’t stand for the national anthem should be shot by the military, the words found significant support.

Amen, they shared. And nobody was laughing.

By Saturday afternoon we had a full blown showdown, with the hardest lines of hate drawn between the two sides.  No football contest can match that drama.

But this type of battle emerging in America with increasing frequency isn’t enjoyable to watch. Neither is it a game.

Our country’s ability to live peacefully and respectfully together despite our differences is on the line.